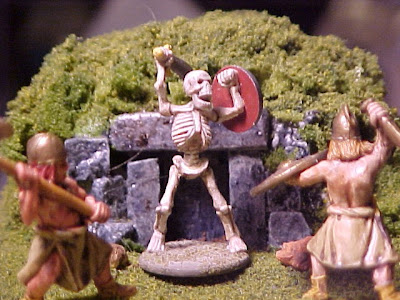 I never really role played or played in games with a group of staunch role players.  Absolutely as a referee I'd make funny voices or odd sorts of accents, but none of the players ever did.

Yes, maybe a player would take on a different attitude when playing the cowardly thief, but we never had an actors workshop sort of experience.  Instead the referee did the "acting" as it were and the players said what they were doing and it was understood that Bill was talking about his thief or Becky was talking about her wizard.

When I talk to others about role playing games instantly there is a negative reaction.  Besides the basement nerd stigma, the pop culture smiting on the IT Crowd, Community and elsewhere, there is also a sense that what I am asking them is to somehow participate in a grade school production of Ivanhoe or Lord of the Rings.  "I do not want to spend the next evening pretending to be a 4 foot bearded fellow with a Scottish accent spouting thee, thou, and other none such , thank you."  Such is the nature, and perception, of pen & paper role playing.  Worse, is the idea that I will make them flit about my yard with capes and foam swords attacking leaf filled trash bags on broom handles called "orcs."

Instead, I have found offering someone to play an adventure game seems to work better.  Having some figures and a map along with some six sided dice at the table also helps quell the initial revulsion.  Second, I line up the "character figures" and allow the vicitm...err player...to pick one.  Once picked I hand them a pre-made character, either a 3x5 card or a book mark character sheet.  That's when reality hits, "wait...am I going to have to talk in funny voices?"

One of the strengths of Melee/Wizard was the ability to just play it as a straight up adventure game.  You have a map, you have counters, and a light character sheet to track your figure.  You could role play if you wished, but initially, most folks just played it as a battle game.  I found people who play it just as a battle game eventually want to add the elements of a back and forth shared conversational experience into the game.

That sort of idea has permeated the writing and development of Heroes & Other Worlds. Sure I know most gamers will call it a role playing game, but I really consider it an adventure game.  The goal of the game is not to pretend to be Twinkle Toes the elven thief, it is to find out what happens when TT adventures into the the haunted burial crypt of Dogu Nos Gerfu.

Whether you want to make funny voices or speak in character are optional adornments that can be added if you wish, but that is not the core of the game.   I do not believe Role Playing is what the game is about...its about Adventure. Heroes and Other Worlds is proudly a game of adventure that you can choose to role play or not.
Posted by Fenway5 at 10:09 AM 2 comments: 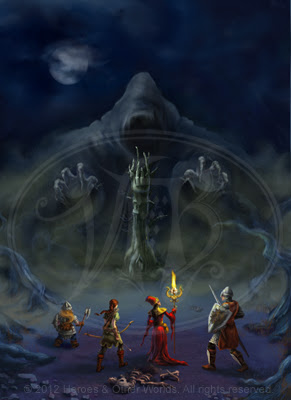 Here is a sneak peak of the HOW cover my wife is putting the finishing touches on, I love it.  Also I got an update, Pastor Beau is still editing the rules, the work continues!
Posted by Fenway5 at 5:49 PM 5 comments: 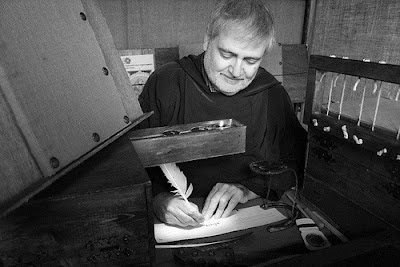 Quick update, Pastor Beau emailed to say he think he might have his editing completed this weekend! Then its back on me to go through the editing and make the changes.  My wife will do a 2nd proof,  then layout, print test...and finally it will be time to RELEASE THE KRAKEN!

October seem like a solid month for a pair of releases: Heroes & Other Worlds, as well as my Sci-Fi game: Rogue Space, Dark Edition. I'll make sure to post a lulu coupon so if you buy one or both game, you will get a discount during launch month!
Posted by Fenway5 at 5:42 PM 2 comments: 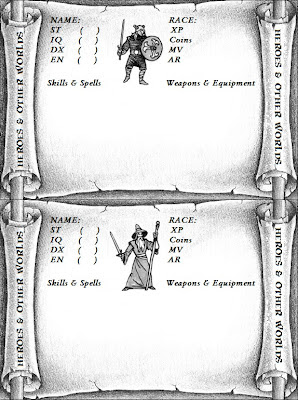 Here are some new 4x6 character sheets for Heroes & Other Worlds I made up.  I have a few more ideas so I am sure more will crop us soon.

The HOW rules book continues in the edit phase.  No specific timeline for completion yet, but we will see how thing progress this weekend.

While the HOW rules book will provide a basic rules book, the Blades & Black Magic book will act like an amalgam, expert rules, wilderness encounter, and setting book.  Included will be alternate magic systems, new spells, new creatures, optional rules for character generation and combat, as well as wilderness/sandbox stuff. 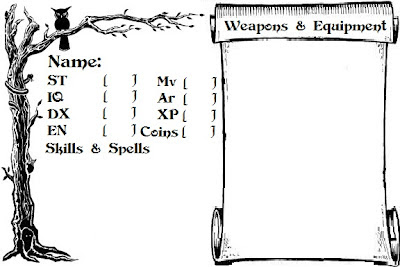 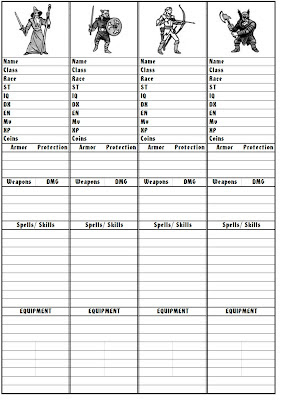 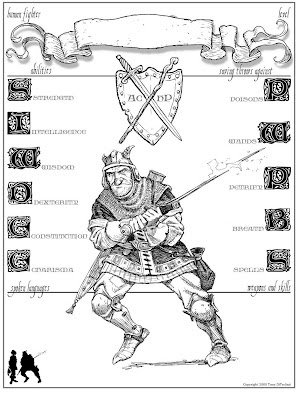 This sheet is from Tony DiTerlizz for D&D and is very inspiring.

And a quick update, the completed rules are now out for editing, huzzah!
Posted by Fenway5 at 10:12 AM No comments: 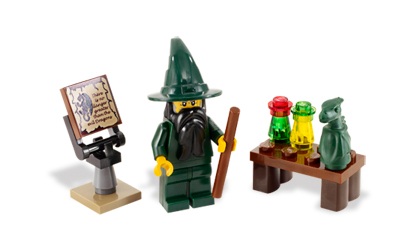 I am happy to say Pastor Beau has agreed to edit the HOW rules book and am hopeful to have it over to him this weekend to start the process! In addition Luigi has complete yet another illustration and Urric has started another one as well.  Stay tuned RPG fans, the cauldron of fun is coming to a boil!
Posted by Fenway5 at 7:15 PM 1 comment: 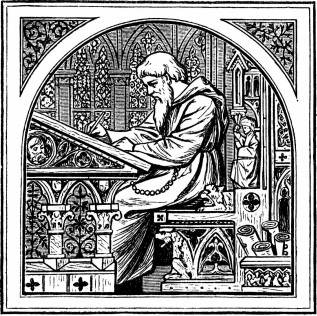 Things are swiftly coming to an end on the rules writing. All that is left to do is the magical treasures portion of the rules!  Yes all skills, spells, creatures, dungeon creation, character creation, combat and nearly all treasure stuff is done!  Good lord what a task to tackle in my "free time."

Before the addition of the programmed adventure, rules index, equipment or art work it is 54 pages.  With all of those added in including an index, I think it may come to 80 pages or so in the 6x9 format booklet format. Then the editing begins...sigh.

Still it should be a pretty svelte and complete RPG rules book. 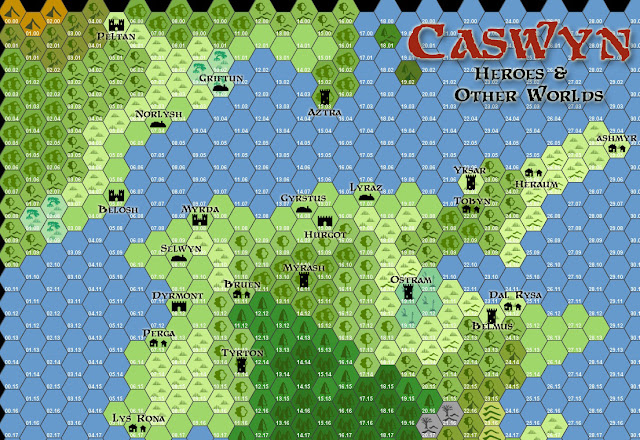 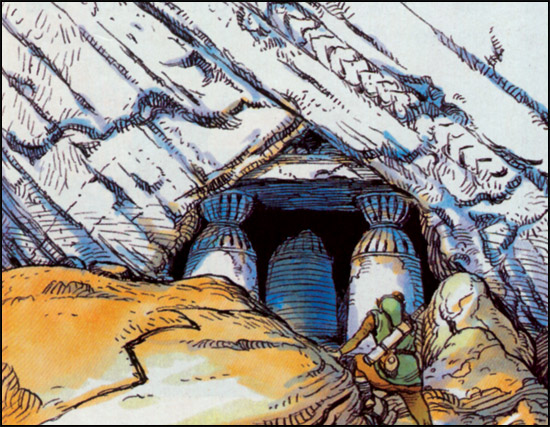 I have had a couple emails asking for additional details about the HOW rules book and thought they might be of interest more broadly.

How different is this from Metagaming's stuff?
Overall, I am using the Moldvay Basic rules book as a template for creating the HOW rules book. I think the core engine elements are similar, but HOW is more focused on role playing than on being a  fantasy skirmish board game.  Yes you can still play it that way, but it is not necessary.  If you choose to use minis/maps-you can use either hexes or squares-neither is assumed just "spaces."

What size is the book going to be?
6x9 like the OD&D LBB or original Traveller rules books. This size will tie in nicely with both the size of Cauldron Magazine (official HOW materials/info) and Dark City Games programmed adventures.

How may pages?
Not sure yet, but I'd say once the adventure and art are included 72-84 pages.

When?
This year, most likely October.