Hey intrepid hero! HOW now has a G+ community, join up now!
Posted by Fenway5 at 12:39 PM No comments: 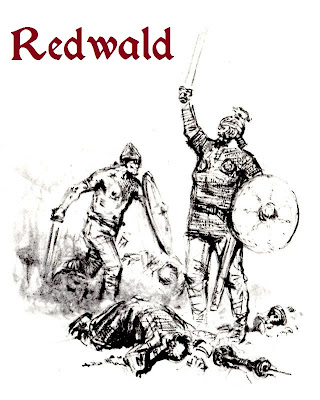 I have had some private emails as well as recent post question asking, in light of Lee Reynoldson announcing he is no longer adding new material for Redwald, will there still be a Heroes & Other Worlds edition?

The answer is a resounding YES!

My goal is to release the HOW version of Lee Reynoldson's Redwald in Q4 of this year!

Lee has written an epic amount of brilliant material so it will be one hell of a great and complete Other World setting! It's grim, its gritty, its outlaw Saxon scum!

Note, the HOW version of Lee Reynoldson's Redwald book will require the HOW core rules to play/ use it.

Moor Hound
ST8 DX12 IQ6 EN8 MV6; AR:-1; DM:1d6+1 bite; SP: Teleport; TR: none
A moor hound appears as a massive, slavering, deep purple or blue (3 foot at the shoulder) shaggy wolf like creature.  A Moor Hound is noted for its green glowing eyes and a blood curdling howl that sounds like a soul in torment. In fact a moor hound is the manifestation of a lost soul trapped in this world and tormented by its untimely, lonely death.  The hound itself has a unique and eerie method of combat. It attacks like any creature, but if hit and sustains damage, it disappears for 1d6 turns. Then randomly reappears within 1d6 spaces (5’ to 30’) of the one who wounded it.  If slain the Moor Hound regenerates on the next full moon.

The only way to permanently destroy a Moor Hound is to find the body of the person that spawned the Moor Hound. Regardless of how long the person was dead, it will look like it is only recently dead (within minutes of death.) A full burial service must be performed to lay the spirit to rest and end the moor hounds haunting.
Some more vile beings have been known to ambush victims in hopes of creating moor hounds and using them to protect their treasure, lairs or other buildings.  The chance of someone unexpectedly slain and being in torment due to unfinished business or other reasons is a rolled result of a 17 or 18 on a 3d6 roll.
Adventure Seed
The players are attacked by 3 Moor Hounds on the road to a village.  When they inquire of the villagers, they find the moor hounds have caused trade and travel to their village to trickle to nothing. In addition people have gone missing or not returned from trips outside the village. They agree to pay the party 200 coins if they can defeat the Moor Hounds.
A witch is setting up an area of control and plans on using the villagers in her plans to build power. So far she has managed to get 3 moor hounds created from the deaths of the many travelers and villagers she has ambushed and slain.  The characters should be forced to scour the area or track the moor hounds to find the home of the witch. The witch and moor hounds will battle them and the players must proceed to have official burials for the slain that generate the moor hounds.
Twists:
The witch is actually the wise woman/leader of the village, she hopes to slay the Heroes as they will have a 1 in 6 chance of becoming a new Moor Hound if she slays them by betrayal.
The Heroes discover the witch is Belmina (from the Witch of Bruen adventure) and has set this trap to take revenge on the Heroes. She will escape if things look bleak.
There is no witch or evil plan, just 3 unfortunate souls slain by bandits scattered in the woods and moors who must be found and put to rest.
Posted by Fenway5 at 6:08 PM 2 comments:

Just a quick update and special news:
Work continues behind the scenes on a Heroes &Other Worlds version off Lee Reynoldson's Redwald setting.

In fact Doug Anderson of Blue Boxer Rebellion blog fame has completed the Redwald setting map! As a sneak peek of what's to come, you can go to the downloads section and get the Redwald B&W map for free right now!

It is best to print as 11x17 (roughly A3), so download the map soon and visit Lee's Redwald blog to get a sense of the Saxon scum setting!