of my hell and I'll strike from the grave!"  --Powerslave, Iron Maiden

This seems like a really cool idea for an additional assortment of spells...
Posted by Fenway5 at 8:39 AM No comments: 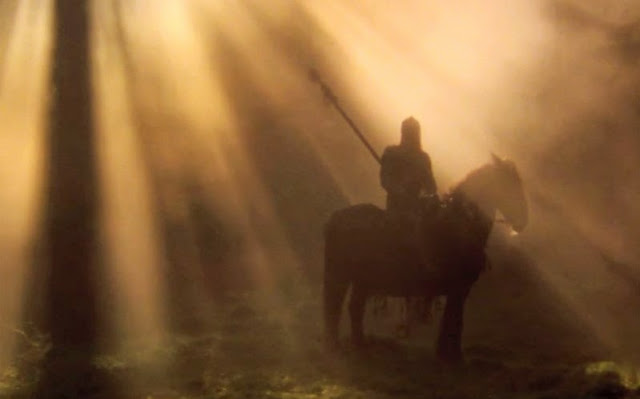 I have never seen or heard about this before now...but its pretty damn cool!  Kids in the U.K. apparently may have some knowledge of this?  There was a short feature commissioned by Lucas to air before showing of Empire Strikes Back in 1980 in the U.K.  Apparently the short film was thought lost forever in some studio bankruptcy.  But as is so often the case in life, what was thought gone forever...is now back...Black Angel. 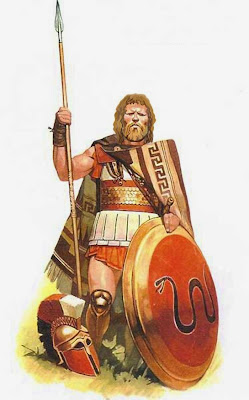 While most people think of greek hoplites clad in bronze armor, this became far less common then most think. The expense of bronze armor, the time and effort to make the armor, the weight of the armor and the stifling heat of wearing the armor in a warmer climate all worked against it. Instead linothorax armor was developed and widely used.

From wikipedia:
The linothorax appears to have been used in place of the bronze “bell cuirass” as the popular choice of armour for Greek hoplites, starting perhaps around the late seventh century and early sixth century B.C. This could have been due to the lower price, lesser weight, and cooler material. Its high point in vase paintings, sculptural reliefs and artistic depictions corresponds with the time of the Persian Wars. By the time of the Peloponnesian War it was still used, and continued to seemingly flourish well into the Hellenistic Period...

In Xenophon's Anabasis Xenophon has to scour the 10,000+ troops to find enough bronze curiasses to give to his 300 cavalry...because the majority of those who had armor, wore linothorax.

Linothorax was formed by layering sheets of linen (from 10-20) and gluing them together. The armor itself becomes flexible when warm due to body heat of the wearer as well as heat of the day. The end result? A tough and lighter body armor that resisted sword hacks, spears and arrows.

Recently a team at the University of Wisconsin-Green Bay researched, manufactured linothorax and then tested its resilience to weapons.  Take a look at the results:

In addition the project team at UWGB came up with a neat infograhpic poster all about linothorax, their tests and its usage 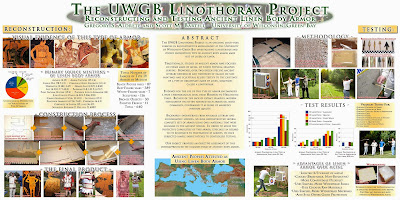 Linothorax in Heroes & Other Worlds
As an armor , in game terms, linothorax would be comparable to leather as AR-2/DX-1, cost 75 coins.  You would expect to see linothorax worn in areas that lacked large cattle herds or enough raw metal to supply  metal for armor. In addition warmer/Mediterranean climates, warriors would forgo metal armors in favor of a linothorax style of armor. In fantasy terms, Elves would also favor a linothorax style of armor so as not to use animal hides for body armor. Hobgoblins might also favor it as it is light but strong allowing them to remain quick in combat but protected-and as the smartest of the goblinoids, the would understand the cheaper, lighter, flexible yet strong protection provided by linothorax.
Posted by Fenway5 at 9:48 AM No comments: 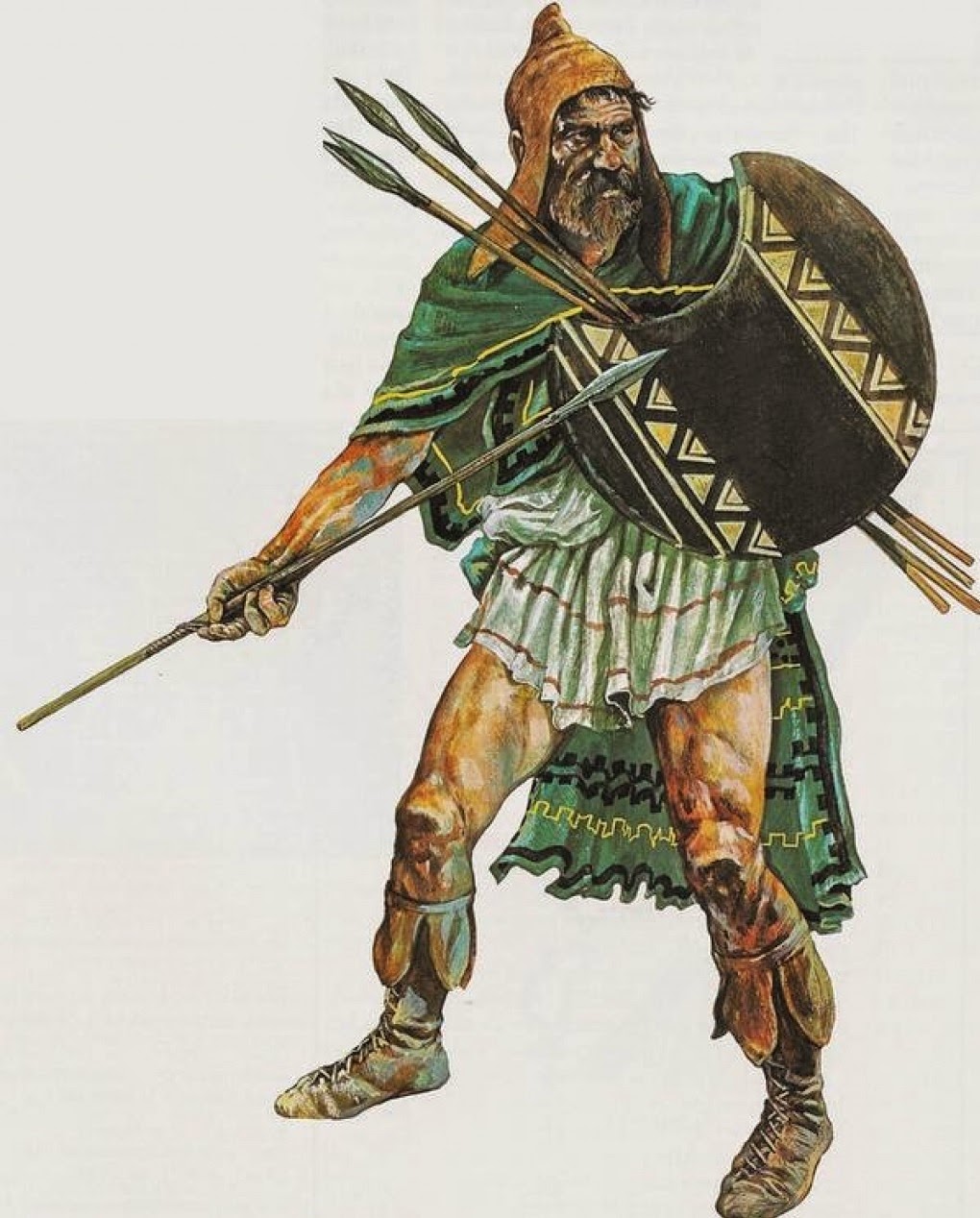 I am a freaky freak about Xenophon's Anabasis.  You may know it as the march of the 10,000.  In a  nutshell, the Perisan Cyrus, younger brother to the King of Persia Artaxerxes II, attempts to overthrow his brother.  To do so, he hires Greek mercenaries (lot of those are available at the end of the Peloponnesian war) to aide him.

After a long journey into Persia battle is joined, Cyrus is killed in battle and the Greeks, (outnumbered, leaderless and in enemy territory) have to march back to Greece--fighting the whole damn way.  This is one of my "desert island" books and I never tire of it.

I incorporate some of the Greek and Persian troop types into my own games.  It gives opponents a "flavor" and makes for interesting PC choices besides the standard medieval "armored tank" fighter.  I give you...the Peltast!


Peltasts are named after the type of shield they carried, a pelte. The pelte was a crescent-shaped shield made of wicker and covered in hides of goat or sheep. While the shields could sometimes be round, in most depictions of peltasts (both Greek or Persian) the shield is typically of a crescent shape.

The peltasts themselves were a skirmishing troop, primarily hailing from Thrace. They were armed primarily with javelins, though some did carry slings or short bows. In addition peltasts would carry a xiphos (greek sword) or a scia, a curved short sword/long dagger meant to curve behind an opponents shield. The pelte provided the primary protection for the peltast and a long cloak, boots or sandals, and a tunic were the only other clothing. Those peltasts from Thrace were known for their Phrygian Cap often made of fox skin with long ear flaps.

The peltasts kit, being inexpensive and readily available/easy to obtain, made this type of troop more common than the hoplite.

The pelte shield itself was carried with a central strap and a hand grip near the rim or with just a central hand-grip. The shield may have a had a carrying strap so that it could be slung on the back and carried on the march.

The peltast equipment was lighter than their primary opponent—hoplites. As a result their tactics were to throw javelins at short range and then retreat if charged. Second their lighter equipment made them more adept at moving through difficult terrain than the heavily armed hoplites. Against other light troops, the peltast could close in and melee as they had a xiphos or scia making them especially deadly foes close in.

Persian peltasts would carry a hand ax known as a sagaris and were referred to as takabara based on their shields (same shape) known as a taka. 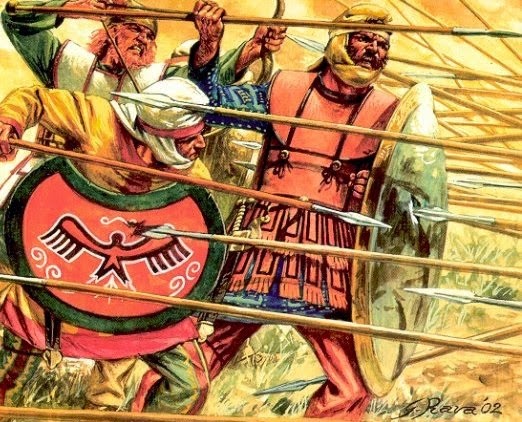 Using the peltast in Heroes & Other Worlds
The Peltast as a foe type would be common in metal resource poor regions or in overall financially poorer regions. In addition certain demi-human types (Elves and goblins) who are fleet of foot, used to difficult terrain and not front line fighters, would field peltast like troops. Bandits or cheaper caravan guards could be peltasts, and in some towns in southern or warmer regions, the peltasts may be the main garrison troop.