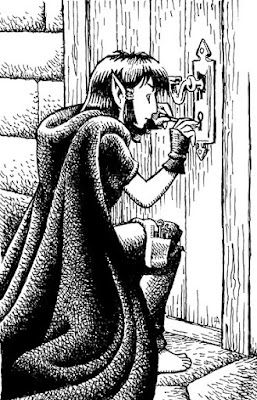 Yes another post showing how the sauasage gets made...

In revisiting my thoughts on skills for B&BM this is how I (currently) am going to play test them. There are 3 basic skill levels: Untrained, Trained and Expert. In a nutshell:

Untrained-Anyone can try any skill but they start with a base of 4 dice in the attempt.  So Jimmy the Knucklehead tries to throw a knife for the first time ever--4/DX in the attempt.

Trained-this is a skill you have "bought" and become trained in you roll 3 dice when attempting to use this skill. Jimmy the Knucklehead is a trained to pick lock, he rolls 3/DX.

Expert-this is a skill you "bought" twice to gain superior training and to become an expert in it.  The base test is still a 3 dice test like a trained skill but you add a fourth "expert" die to the attempt. For the test only use the 3 lowest dice rolled as a sum, the player dismisses the highest die rolled of the 4 and does not count it in the attempt.

Jimmy the Knucklehead tries to charm the ladies, and everyone knows Jimmy is an expert in sweet talking the ladies! So he roll 3/IQ+1 Expert die getting a result of 3,3,4,5.  The highest die rolled (5) is ignored and Jimmy's total is (3+3+4) a 10! Too bad Jimmy's IQ is 8...what a knucklehead

Note, The referee, based on difficulty, may still add a die or DRM to any attempt made.
Posted by Fenway5 at 8:10 AM 16 comments:

Below is a slightly edited skill (based on the HOW skills list) set for Blades & Black Magic.  Anything you see as missing or extraneous? In addition I am looking at the Parry maneuver (again) and am liking the play test of Parry at 4/DX--but you get to add your full weapon skill. AS always your thoughts and comments are valued. 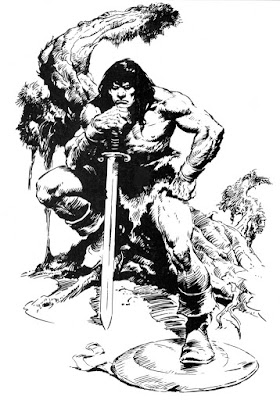 One of the options I am considering for Blades & Black Magic is changing a bit of how skills work in this setting versus in Heroes & Other Worlds.  Using Melee/Wizard as a guide here is how it could work:

XP can be spent to learn a new skill or increase attribute.

Also Melee/Wizard only includes skills for combat/spell casting--not for adventuring. Should B&BM adhere to this combat centric focus or should a few additional common adventuring skills be included as well like riding, stealth, survival, thieving, tracking that kind of stuff.
Posted by Fenway5 at 10:05 AM 25 comments: 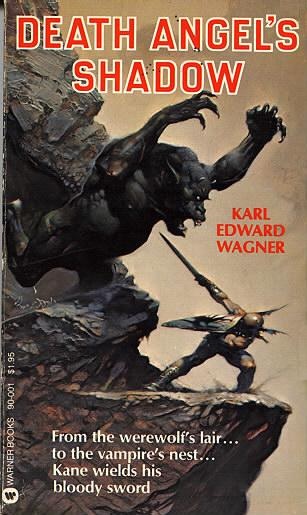 Besides Conan--my second favorite S&S stories are Karl Edward Wagner's Kane stories.  I first discovered in the 80's as my older cousin who was big into D&D and Palladium Fantasy had a few of the books. I burned through all of them in about 2 weeks one summer and managed to track down my own set of them a few years back.

I always hear folks discuss Conan, Elric, Fahfard & Grey Mouser, Throngor...but for me KANE winds up being the #2 influencer when I think of S&S literature.

I spent my flights this week re-reading some classic Kane stories to help fed the creative engine. Kane is an interesting character both smart  enough to outwit foes and able to physically crush his foes. Kane is immortal...but can be wounded and potentially killed.  The stories are dark and gritty despite the seeming conceit of the hero always surviving.

Who is Kane? From wikipedia:
Little is known about Kane's origins. In the story "Misericorde", he declares to one of his foes that his father's name was Adam and his stepmother's name was Eve, possibly making him the biological son of Adam's first wife Lilith. Like traditional depictions of Cain he is a powerful, left-handed man with red hair, said to have killed (strangled) his brother Abel, and has been cursed by a mad god with an eternal life of wandering. Nevertheless, he is vulnerable to wounds, and it is said that he can be killed "by the violence that he himself created", although his wounds heal at a rapid pace. Kane is portrayed as both an excellent warrior ("I kill things," he tells Elric in "The Gothic Touch". "It's what I was made to do. I'm rather good at it") and an accomplished sorcerer, who spends the millennia wandering from one adventure into the next. Also like the Biblical Cain, Kane is marked as a killer; those who meet the gaze of his icy blue eyes cannot maintain contact for long, for they give away Kane's true nature as a butcher of men.
He is often compared to Conan the Barbarian, but Kane is quite different in that he is a devious character with a more somber and reflective outlook on life than Conan and has none of the latter's dislike of sorcery. His creator described him as a character "who could master any situation intellectually, or rip heads off if push came to shove".[1] Some commentators have argued that the fantasy protagonist that Kane has most in common with is Michael Moorcock's Elric, but Wagner was also inspired by Melmoth the Wanderer.[2] Kane is unconcerned with common morality, since no human relationship can ever last more than a small fraction of his lifetime (although the daughter he fathered in "Raven's Eyrie" turns up as an adult in the modern-day "At First Just Ghostly"); and he frequently ends up on the wrong side in the conflicts in which he involves himself, often to his own detriment. A common theme running through all Kane stories is the hero's weariness with his own immortality and his attempts to give his existence meaning.
Posted by Fenway5 at 7:51 PM 9 comments: 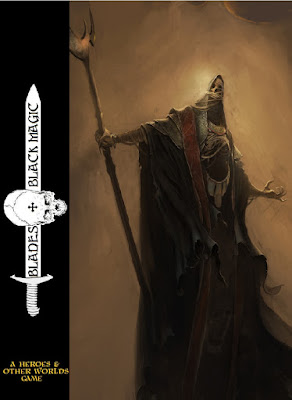 The magic part of Blades & Black Magic is probably the portion I really will work hardest on developing.  I want to limit the amount of "direct fire" spells...so magic hex bolt won't be on the menu.  Plague touch on the other hand...

Here is what I am looking at for magic types starting from weakest to strongest:

Magic Circles-these, like wards, have to be prepared prior to being activated. Circles of protection, of summoning, teleportation...these will be the high IQ powerful stuff...that may requires a sacrifice to power.

As the majority of spells will require a lot of player time/effort to work--how much fun will it be to play/referee this kind of magic system?  Considering the normal "spell-slinger" experience will this actually be playable/interesting?
Posted by Fenway5 at 7:00 PM 31 comments:

Time keeps on slipping into the future 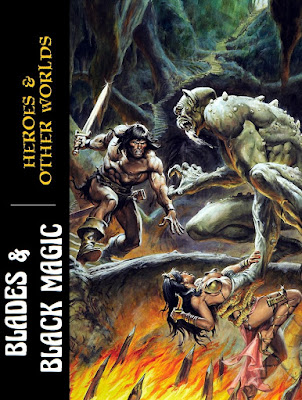 A few quick updates as its been awhile.

First I needed a break from producing HOW material--the Terrors & Treasures book really burned me out.  That creative burnout combined with a real job workload that is even crazier this year than last and of course making time with family and friends...the result is we get less output this year.

So to clear my head for HOW projects--I chose to finish revamping my ode to Star Trek...Far Trek RPG.  The new revised version has been in the on and off again revising stages for years, but I took the time on flights to grind it out and complete it.

It's being edited now so my hope is the revised edition Far Trek will be out by the end of July.  It's will be a free PDF download...and for a VERY limited time (less than 24 hrs) I will make a print copy (at no profit) available on Lulu.  I'll post here when that goes up in case you want one.

So my hope was by "turning some different gears" I could unstick the creative HOW gears and get them turning again.  I'd say it is working.

So what I am currently at work on is Blades & Black Magic--I've torn down the work I already did on this and am doing a lot of revising and additions.  B&BM will be a gritty S&S style sourcebook and in fact have a basic set of HOW rules in it--think of it as Melee+Wizard type of rules.  The biggest change will be the elimination of EN as an attribute in the B&BM setting. Magic will be cast as blood loss/wounding --and  there is no EN stat to absorb damage.

There will be a complete setting, countries, new "black magic" spells and character creation will be different--I'd say it would be more like Traveller in concept.  You pick (or roll) for your home land, then pick or roll for your class (adventurer/sorcerer) then you roll on a chart for your skills or attribute upgrades.

So what's my goal with this? one word--Conan

I want to create a Conan type setting and world book that will allow for S&S style gaming and world with the HOW system.  For the current HOW player--it will have new spells, a setting and a different take on character creation.  For a new HOW player, it's all the basic nuts and bolts needed to game out of one book but can be expanded with the full rules book, Terrors & Treasures book, Magi Carta book etc.

So while I know it's terrible to have to wait and (just like you) I'd like to have something new in my hand right now--these things take time.

As a one knucklehead operation, done in the strange times when inspiration and opportunity intersect, I hope that despite the gaps and waiting you find the results worthwhile. As always, and as always truly meant, I very much appreciate your patience, time and support.
Posted by Fenway5 at 7:00 AM 21 comments: