I recently finished the first Black Company trilogy by Glenn Cook and I'd like to recommend them to you.

There are a number of books in the overall series, and while I have only read the first 3, I am hopeful the rest have the same qualities:

I think the literature (regardless of genre) I enjoy most are those with characters who are complex and do not always do the right or even the best thing.  I don;t like being able to guess where things are going or how things will play out within a story.  I prefer "mud and blood" gritty details to high fantasy wispy scenes.  I prefer lean prose to overly detailed descriptions.  In all of these things Glenn Cook's Black Company excels.

In a nut shell the Black Company is a mercenary group with a long history and the tales are told from the Company's Historian point of view.  The company (early on) ends up working for the bad guys (The Lady and The Taken) and there is a constant tension in the tales because of it. The Lady is an ancient evil who was wedded to The D0minator (think Sauron).  While the great evil was defeated, its come back...bent on domination...and the Black Company ends up working for them. Imagine if the LotR Fellowship was actually working for Sauron but torn about doing it...that's about the most basic (although not accurate) sort of idea.
There are many more details and twists to the story arc, but I won't spoil it by telling here.

The books are short in keeping with their lean prose, and I've manged to blitz through them on the many plane trips for business I've had this year.  I think they are quite good and if you are interested in a HOW military based campaign, or are looking for a unique take on villains and magic, this Trilogy is a great resource on top being a really good read.
Posted by Fenway5 at 5:43 AM 2 comments:

As promised the map pack for Cauldron #1 is now available for free download at the Heroes & Other Worlds downloads link to your right.   In the span of 8 months the HOW system has seen the release of:
Holy crap am I tired!

Behind the scenes I have two free adventures that will be available for download this summer. One will release in July and the other will release in August.  In addition, I have worked on Blades & Black Magic as well as a conversion of Lee Reynoldson's Outlaw Saxon scum setting Redwald.

You see I have an earlier SciFi game...Rogue Space...that is getting a revised edition.  So rather than burn myself out on HOW, I am stepping away for a wee bit so I can knock out the Rogue Space revision over the summer.

Fear not HOW fans, as I will still post here and as I said, I have two adventures to release this summer and some projects to tinker with continually for HOW. So I am in no way gone nor somehow taking a break form HOW, instead I am just taking a break form the crazy pace of trying to make stuff for HOW.  I am neither gone nor on hiatus, just slowing the pace for the summer....a repose if you will.

Don't forget Cauldron #2 can still use your submissions if you'd like to contribute! Submission deadline is 8/31/13--email me direct fenway5 (at) frontier (dot) com 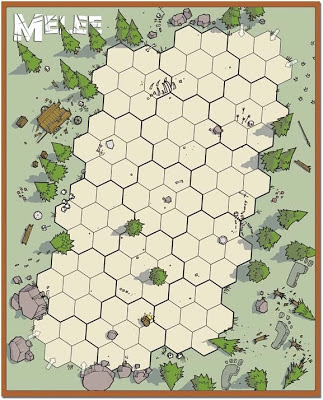 This weekend I will be compiling the maps from Cauldron #1 into a letter size (8.5x11) map pack for free download.  In addition there was an image omission from the "Gone to Ground" scenario that I will add into the map pack!

Thanks for your support!!

Map image to the left is a redesign of the Melee map from Kwanchai Moriya.
Posted by Fenway5 at 2:05 PM 2 comments: 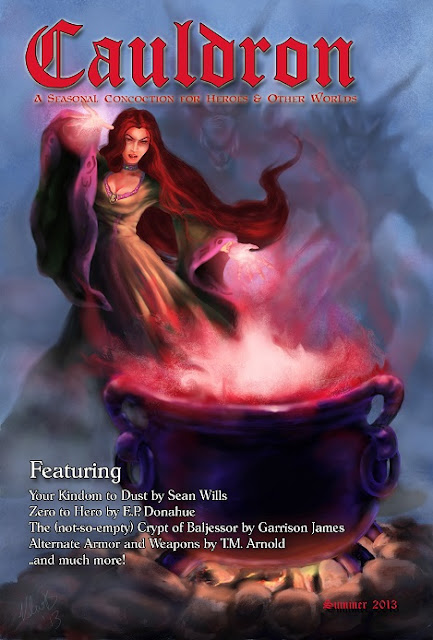 Well fellow Heroes, it is COMPLETE!  Man what a chore to get over the finish line today!

Well it would not have been possible with out the outstanding contributions (in alphabetical order) of:

and of course my lovely wife!

Note the Book & PDF are both full art, thus the prices are fairly close to one another.  Use code JUNEBOOKS13 to get 20% off.

Also my wife's cover awesomeness is ONLY available if you buy the physical book.  It's worth it because she is going to get a nice bouquet of flowers from the proceeds! Check out that cover majesty, hell yeah she deserves it!

You can buy either (or both) editions of Cauldron #1 at lulu.com or just click the Heroes & Other Worlds cover image in the top of the bar to your right.

Below is the table of contents for Cauldron #1 and I sure hope to have YOU get inspired and contribute an article or adventure to Cauldron #2! Send it to me: fenway5 (at) frontier.com

Also I am pleased to support Dark City Games with issue #1 as their ad reveals a new Sci-Fi adventure coming this Autumn!

Thanks to D&D, it is now standard to have an "Appendix N." For most games it is filled with lots of great, and some suspect, fantasy works. I have not decided if I will add one to Blades & Black Magic yet, but I thought I'd yap a bit about it here, and that in the end may be more than enough.

My "Appendix N" would actually be more an Appendix Historia.  I find history and historical fiction far more interesting as a draw and basis for creating fantasy adventures instead of say a Robert Jordan novel. That's not a slight against Mr. Jordan (God rest his soul) but more a statement about how I think fantasy novels can negatively  influence  your own adventures.  In other words, what you create will be in some way a pastiche of the fantasy work you were influenced by. Contrast that to taking a historical event and adding a bit of the fantastic into it.  To me, this creates a solid grounding which is a pigeon hole that players can become comfortable in, then you leak in the fantastic and up the ante. The Song of Fire and Ice series (Game of Thrones, etc.) has its genesis from the War of the Roses..but with a lot of fantasy tweaking.

So let's take the French & Indian War as we called the 7 years war here in the colonies.  In essence there were numerous raids back & forth by small bands and a few major engagements around forts and cities.  The majority of the conflicts were small forces raiding and harassing one another.  I used this as a basis for long campaign where two human kingdoms were at war between the edges of their colonies. The players were all "colonists" caught in between and tasked with defending their little village. Eventually they are raided...by a mixed force of humans...and elves! Yup the elves played a "neutral" force and many trials and misfortunes rested upon the ability to convince elves to stay on the player's side.  Then other fantastic elements would appear, caverns, wendigo, giants, ogres, undead.  The deeper they explored and the worse the war became the worse the fantastic element that was unleashed...but it never became a "monster of the week" sort of thing.

Anyway, my point is from a historical event I was able to slowly build a campaign that didn't rely on monster of the week, nor a deeper dungeon level, nor "more magic" to create excitement. The historical events were already proven tense and interesting, I just had to tweak them a bit and had the joy of adding a little more fantasy wow factor when I needed to!

So this summer I have embarked on a massive summer re-reading of some classics that form the core of the Appendix Historia for HOW.

Herodotus, The Histories
Thucydides, History of the Peloponnisian War
Livy, The War with Hannibal
Arrian, The Campaigns of Alexander
Xenophon, The Persian Expedition

I have a laundry list of more history, a lot of great books from historians like Adrian Goldsworthy, John Keegan, Donald Kagan and Victor Davis Hanson, as well as great historical fiction to recommend as well...but finishing Cauldron #1 and making it available this Saturday is probably of more immediate interest.

In Cauldron #1, Sean Wills has created a unique adventure entitled Your Kingdom to Dust. As written it hints at a middle eastern motif.

As I was editing I tacked a wee bit into it naming the city and adding a little color to the NPC's.

That inspired me to think a bit deeper about the now named City of Aziz.  I am going to blame the combination of having watched Lawrence of Arabia last night along with editing Sean's adventure today...and like chocolate and peanut butter they are creating something good!  Don't worry Aziz is in the "to do" pile...for the Cauldron #2!
Posted by Fenway5 at 2:27 PM No comments: 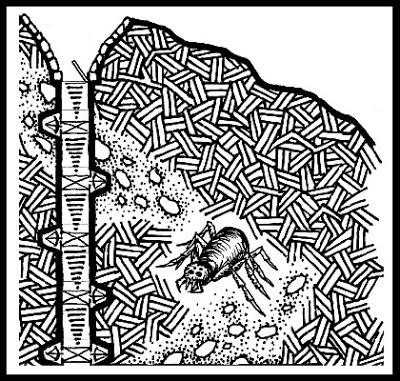 Work is cracking right along on Cauldron #1. This one is so chock full of adventuring goodness I can't wait to hear the tales of your Heroes experiences!

To the left is a sneak peek of a hand drawn map by A.J. Stone of Stonewerks blog fame to accompany E.P. Donahue's  adventure for "zero level" Heroes!  Better yet? He created it so you could download and use minis to play it!  That's just a tiny taste of what's to come in Cauldron #1

I am probably MORE anxious to get this completed and out because I'd really like to see more folks playing HOW and not just reading it.  With Cauldron #1 there are no excuses for not grabbing some dice and having a go! The work continues...
Posted by Fenway5 at 11:38 AM 2 comments: