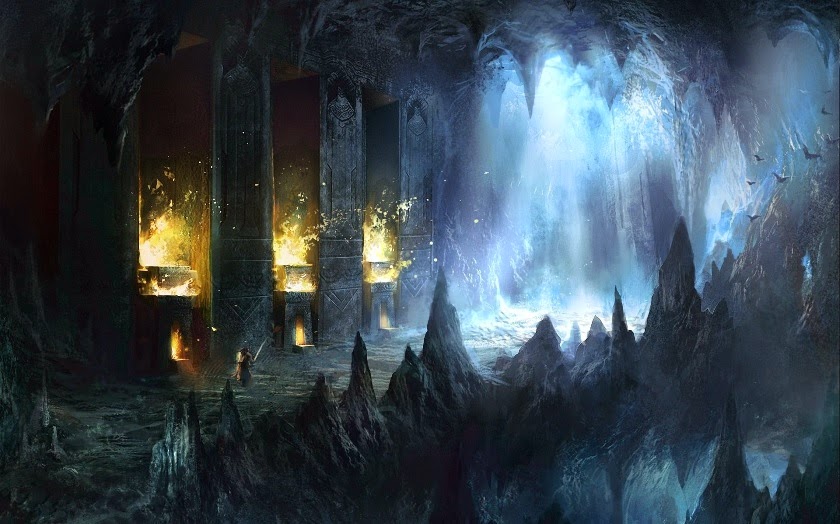 Telecanter, over at Telecanter's Recedng Rules, did a series of posts on adding wonders to your sandbox.  So what defines a wonder?  Something different, unique, or fantastic that would be mythical in our own experience in this world.  I am a fan of the grim and gritty fantasy experience, but I still think there is room, no a real need, for the strange and fantastic to perplex players and add a sense of fantasy to the game.

So I put together a booklet of all of Telecanter's 100 Wonders Worth Exploring.  If you print the PDF in booklet form it will fit nicely with the rest of your Heroes & Other Worlds game books!  So if you are building a sandbox and want to add a little something wondrous for your players to discover, Telecanter's work is an excellent resource! You can find it in the Heroes & Other Worlds downloads and can  download it here!
Posted by Fenway5 at 6:36 AM 5 comments: 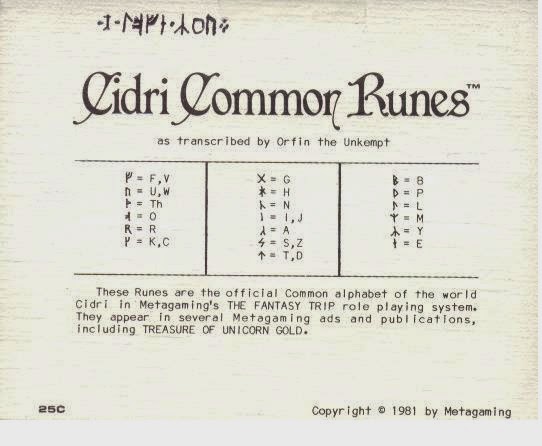 Tim (of HeroPress fame) and his group have established a blog to chart their Heroes & Other Worlds campaign in a re-imagined Cidri!  Check out their Chronicles to Cidri blog and follow along in their adventures!
Posted by Fenway5 at 1:13 PM 3 comments: 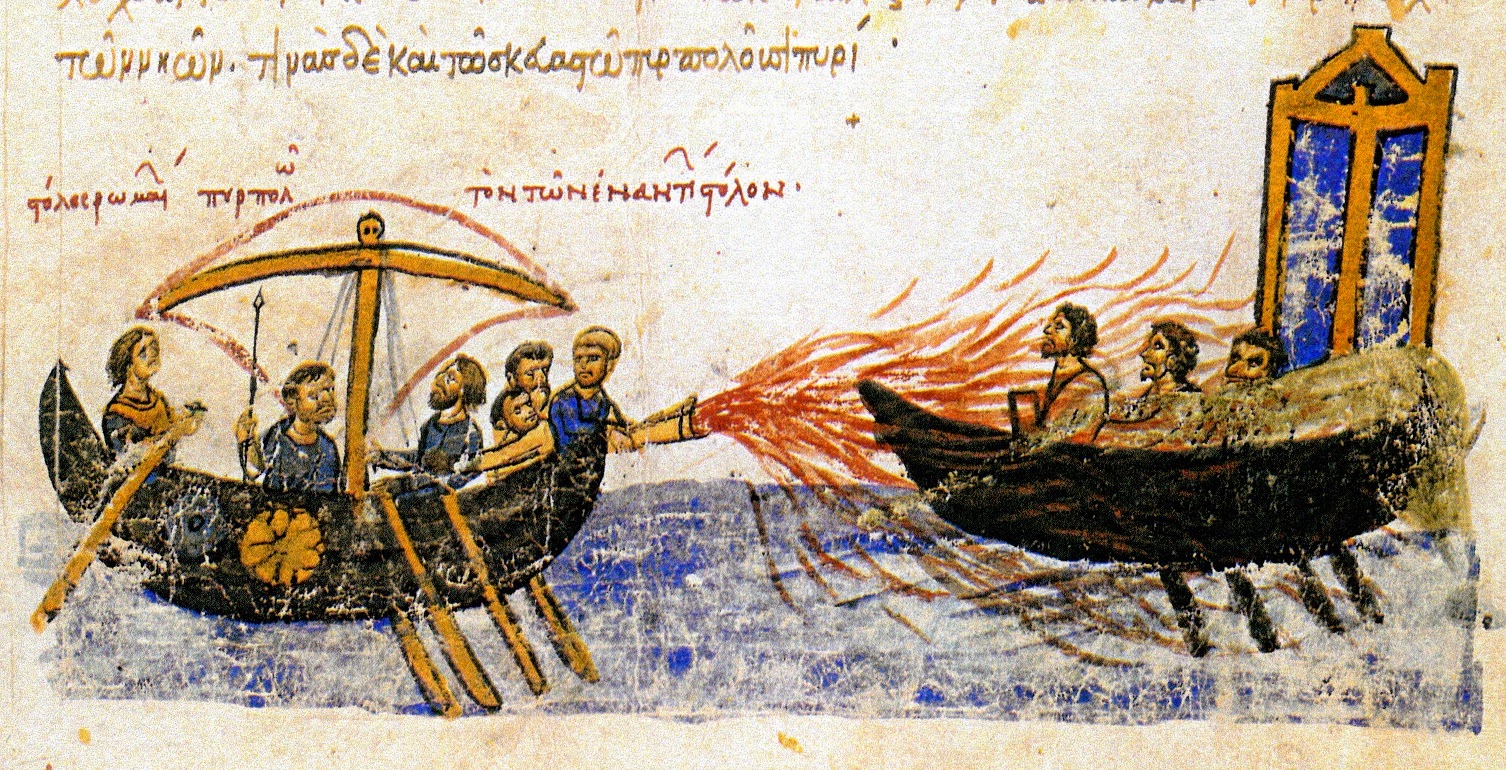 So I have just about wrapped up the naval rules for HOW.  They are more conducive to the RPG style of play rather than trying to build a full blown tactical mini-game.  I know some folks really want a full tactical mini-game, but in my own experience the adventurers wanted to do one of three things: Close to board the other ship, escape the other ship, just sail to the next location.  None of those things, except boarding, really need a map and figures and even then it is easy to play it out using standard man to man combat rules.

That being said, I know some folks are still searching for, or really want a tactical ship to ship game. So let me point you to a couple of options.

First is Ram Speed, from Metagaming! Yes there are still sealed copies availble for $10 (+S&H) from Decision games.  No idea how many they have so if you want one, get after it!    What is Ram Speed?  Well you can read a review here! In fact Decision Games has a number of still sealed Metagaming classics including the fantastic sci-fi game Warp War...and a little game called Dragons of Underearth! The shipping is steep, but it may be worth it to get these classics brand new!

Second is a cheaper and simple little game you can construct yourself out of mini match boxes called War Galley by Thomas Lofgren.  The rules are short and FREE! If you have those small match boxes it can be a very fun little diversion.  You can download the rules from the HOW downloads section of this website.

Also as the previous two posts dealt with maps, I wanted to share two with you.  First is the Dwarf Land map that Adam (ewookie) placed a hex grid over.  Second is a revised/updated map of Barbarian Prince from Dwarfstar Games. So if you need  a new hexcrawl map to be inspired by both are up for download now!
Posted by Fenway5 at 6:04 AM 2 comments:

Master of the Amulets 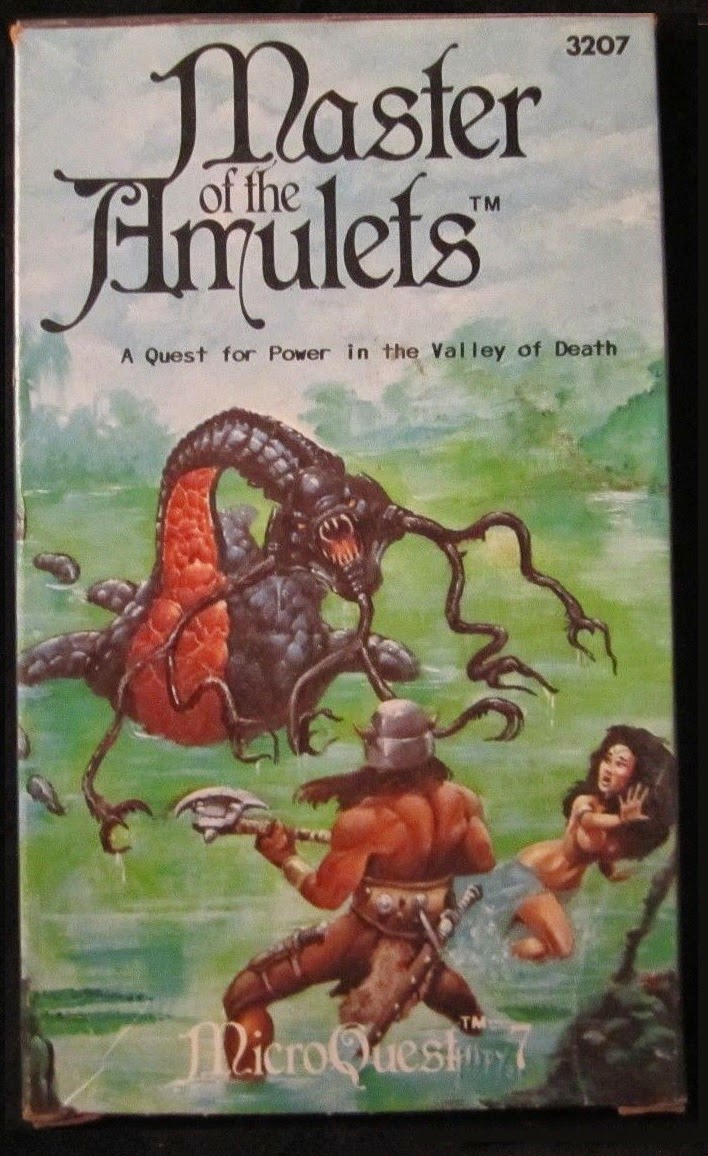 I never got a change to play this micro back in the day and in doing some research I came upon a great review of this game.  What strikes me as most interesting is it appears to be the exact type of game I would have loved, sandbox with a purpose!

The gist of the adventure is there are 24 amulet scattered about randomly in the Valley of Death. In order to escape you have to find the right amulets.  Of course while searching there are lots of random encounters.

So while there are no specific "story lines" to read as is the case with most solos, there is a great deal of adventure to be had.  As a result, the story will be  what ever trials and tribulations you suffer as you seek to exit the valley.

There is a nice review to read on this adventure and what was most notable to me is the adventure was apparently written with only Melee/Wizard rules and prior to the publishing of AM/AW/ITL...yet this adventure was not published until AFTER the full TFT line was released which causes some issues.

So I will point you first to a nifty little review of this classic.

And second to Scribd which has a PDF copy you can look at.

Did you ever get a chance to play it? If so what was your experience with it?


Below is the revised map of MotA made by Angantyr. 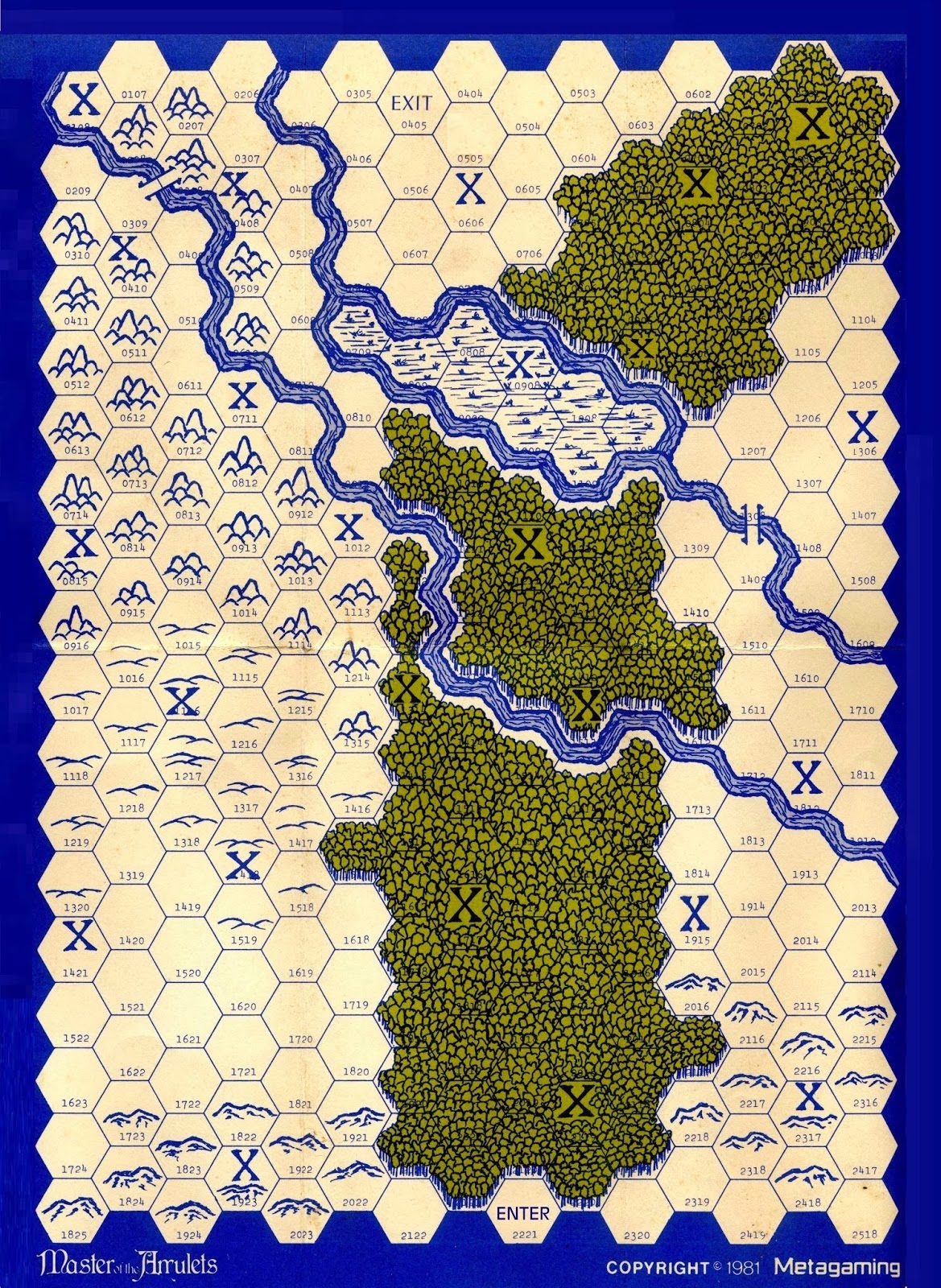 Also on Angantyr's blog is an outstanding treasure trove I found...a list of EVERY potential and unpublished TFT product!  Good lord what might have been! I wonder if Howard Thompson had focused his (or someone's) energy on making these real what might have been...well read it and see for yourself!
Posted by Fenway5 at 7:02 AM 9 comments: 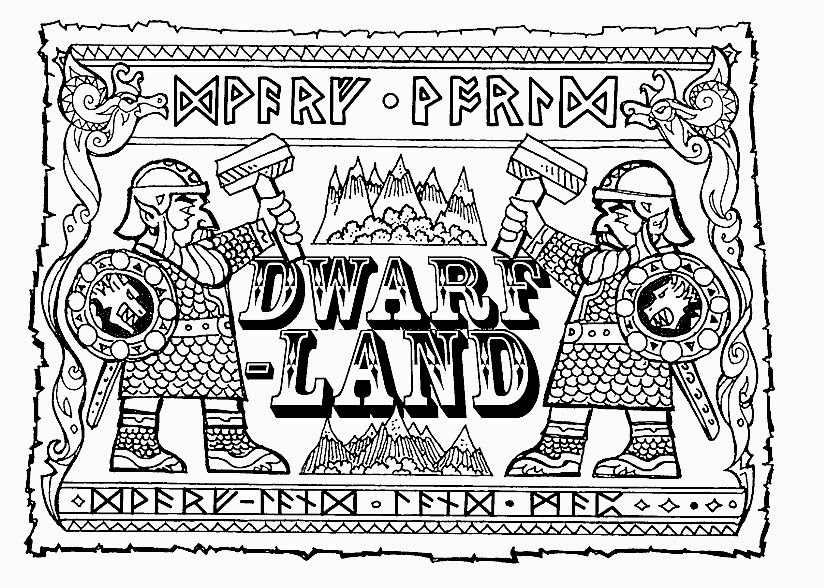 Paul, by way of Scott at the (for) now defunct Huge Ruined Pile blog, has posted a wonderful map of DWARF-LAND. This map was drawn by the fantastic Mr. Russ Nicholson! (yes THAT Russ Nicholson!)

So while my Saltbox idea was not as successful as I had hoped, perhaps with this Dwarf Lands map...and some sort of numbered hex overlay...a fantastic and massive crowd sourced HOW sandbox might be possible?  Go to Paul's site, get the map and give it some thought.

Anyone want to take a stab at dropping a numbered hex overlay on it?  This could be quite an exciting undertaking...
Posted by Fenway5 at 7:05 PM 3 comments: 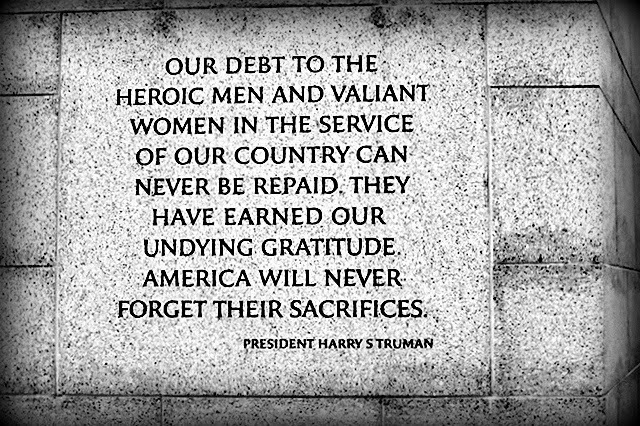 It's Memorial Day in the U.S. today and I'd like to give my thanks to all the veterans who currently serve, have served, and a special thank you to the families and friends of those who lost a loved one in service. My extended family has had many members who served and some who are serving currently.  I am truly humbled and thankful for their sacrifices. God bless.

On the game front, I am excited to say Luigi "Artkid" Castellani was available to create some new illustrations. This first rough sketch from Luigi is a nod to a classic Dave Trampier illustration, a sneak peek of what's to come... 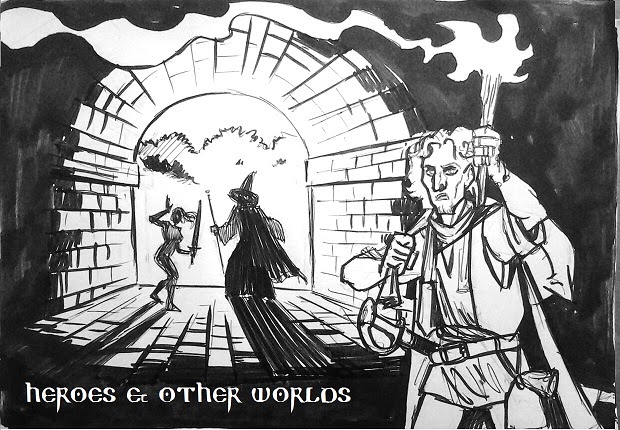 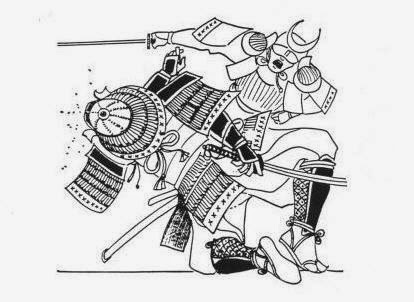 One of the "twists" to combat we have experimented with in my home game is adding a weapon speed to the initiate roll for each character/enemy and then running action in order of initiative die roll+ weapon speed from highest total acting first to lowest total acting last.

So far reaction is mixed. It's made combat a bit slower which some do not like. The added time comes from organizing player sequence each turn. (die roll+ weapons speed modifier, then comparing and ordering, then actions from Highest total to the lowest total).

The ones who do enjoy it though feel the added time each turn is worth it because the active player sequence is "more real" based on the type of weapon being used.  In other words the dagger tossing thief should have an advantage to acting faster than the battle axe wielding barbarian.

Want to try it yourself? Below is a very simply chart to experiment with on your own! Let me know what you think.

I do not know if this discount works globally, so I apologize in advance if it does not work in all regions.  Game on!
Posted by Fenway5 at 4:48 AM No comments: 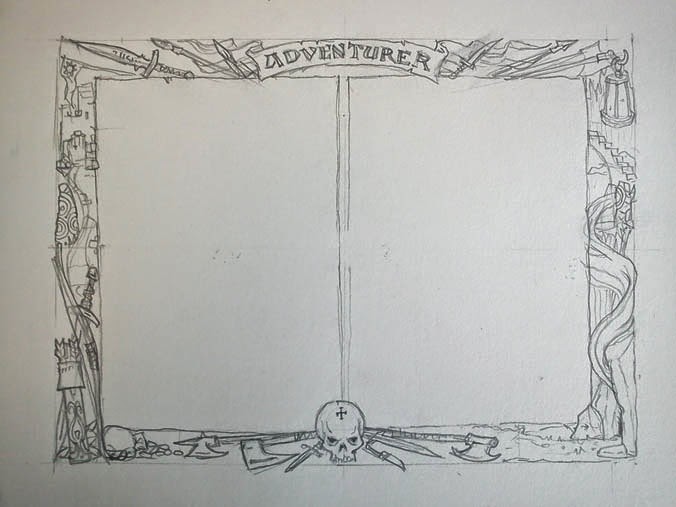 Dave's work even at this rough stage is brilliant and I am anxious to see the final work!
Posted by Fenway5 at 7:04 PM 4 comments: 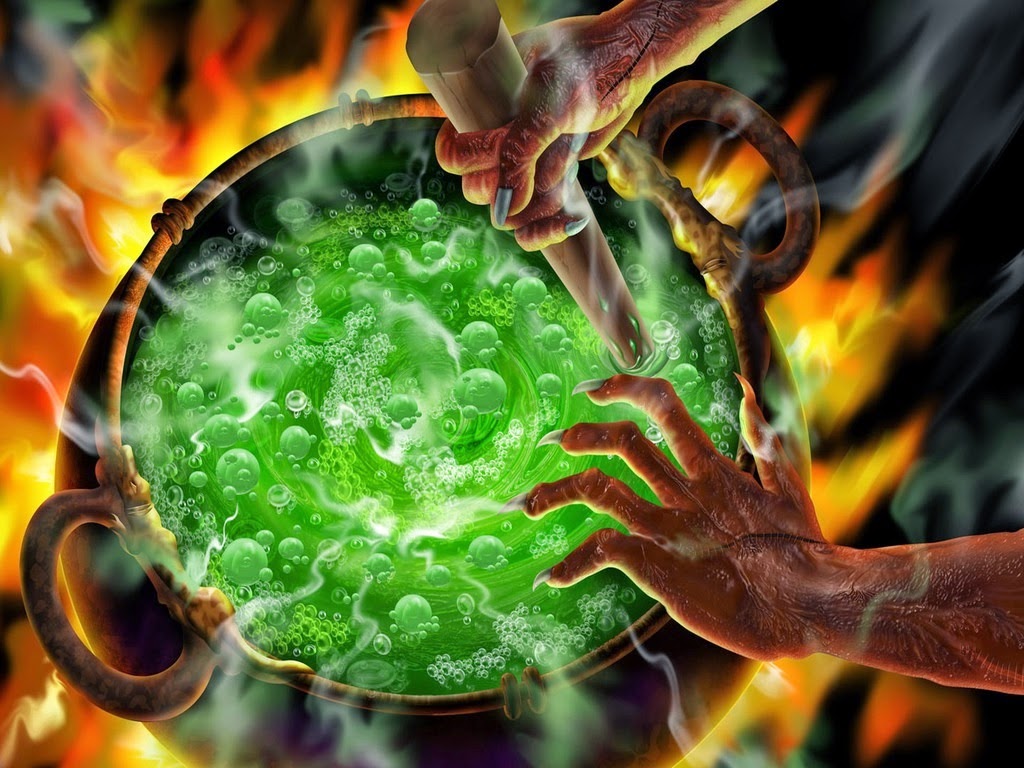 Okay I am narrowing down the contents for the next issue of Cauldron, and here is what's in the brew so far:

Ideally I'd like to include a short adventure and a short solo adventure as well.  The work continues!
Posted by Fenway5 at 5:44 PM 6 comments: 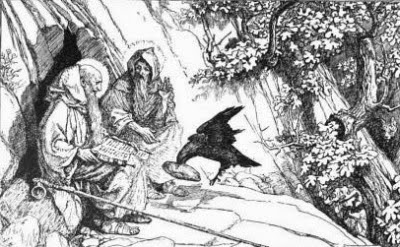 I know I have discussed this before but this is an updated look at a background career coming in the Blades & Black Magic supplement.  There will be random tables to determine background or you can just read through and choose one.

Attributes provided are a basic line or quick stat up for Players/Referee, but not mandatory.

Each Background will have an "Ability" which can be used or just ignored as the Referee decides for his campaign.

Skills for the background are listed and its not mandatory to take all 5, just 3. For a Player wanting an instant character, background concept, or a Referee needing an NPC on the fly, this should be a good resource I think.  Not sure how many backgrounds I'll end up with but I am gunning for 100+.  Then there will be tables for random rolling one such as by Environment (Urban, Wilds, etc.) or by Class (Adventurer v Wizard).  Anyway here is a sample of the Abbot.

ABBOT
The most wise and the oldest of religious scholars become abbots and thus the leader of a monastery or religious order. An Abbot tends to be older than your standard starting adventurer, but may be on a journey to right a wrong, seek a religious artifact or sacred truth, or for some reason take to the road for penance for misdeeds or spiritual awakening. An Abbot will be in their later mid-life (think 50's in terms of human age) and is a scholar and teacher, not necessarily a fighter-although anything is possible.

Ability
Persuasive Oratory: When giving a formal speech/sermon you can influence others to see your point of view, a listener requires a 4/IQ test to resist

Hook
A quiet but fulfilling life was interrupted. Weather by fate or fortune a dark spirit entered your quiet life and corrupted members of your flock. There were deaths and factions created which lead to you leaving. Now whether seeking redemption, a solution, or a new start you have started a journey you never expected.
Posted by Fenway5 at 1:51 PM 6 comments:

Someone asked for a sneak peek, so here you go a selection of counters done for Heroes & Other Worlds by Mark Hill!  The work continues... 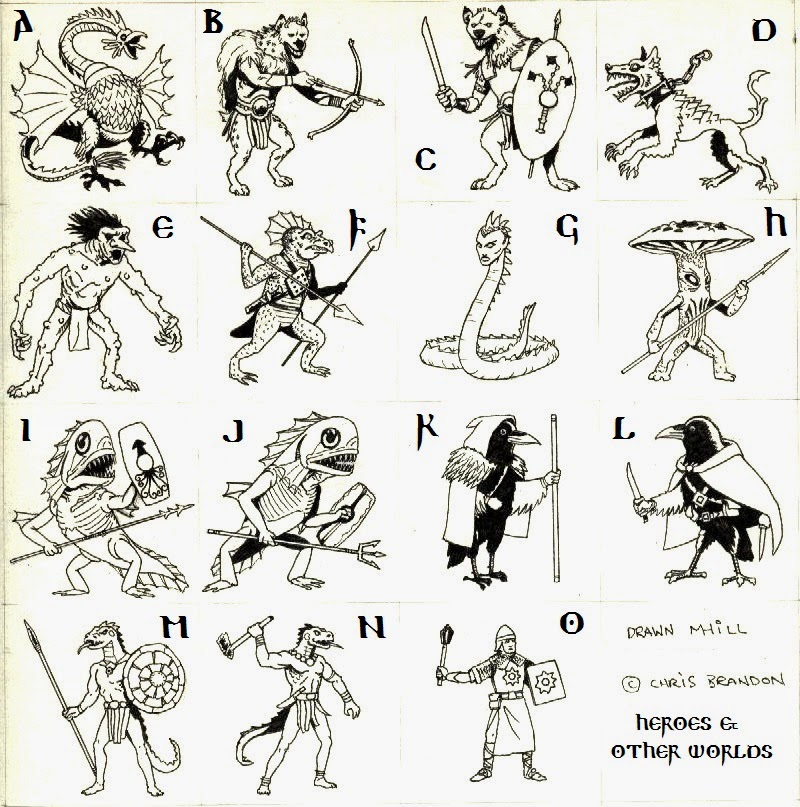