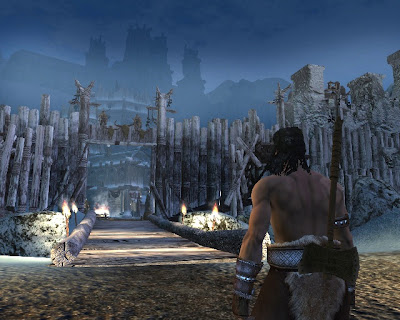 Experience is a way to reward a player's character for its efforts and to incentivize certain game play actions. The goal being to increase a character's overall abilities making them better/stronger/faster through surviving a perilous life of adventure.

For HOW, I have already decided treasure of any type is its own reward. I believe the actions and successes a character makes should provide a tangible reward as well as being a reflection of their abilities.

With all of that in mind, I'd like to propose the following simple system for HOW:

For any test roll (attack, defense, spell cast, skill use, etc.) a character makes that succeeds, the numerical difference between your target number and your dice roll is awarded as XP.

Example: Toshiro Redcap attempts to pick the pocket of wealthy merchant. He needs a 10 or less to succeed. Toshiro rolls a 7 succeeding.  10(goal)-7(roll)= 3 XP rewarded.

For each additional die used in a roll for a test (instead of 3 dice you rolled 4 dice or 5 dice) you get +4 XP points added to the success difference.


That's it, clean and simple.  Now no matter what type of adventure (combat heavy, trading, thieving, etc.) you run, any time a test is successfully made, the character is rewarded.  Also if your are more successful in a test attempt, you automatically get more points!  If you are more skilled, you will start generating more points to reflect that as well. Indeed there will be additional referee optional rewards for game play...but the core XP generating model is that simple formula.

I will have to re-figure the math, but initially, I still believe 100xp x New bonus level works as a method for increasing the ability, or learning, new skills. (+1 bonus=100xp, +2 bonus-200xp, etc.)

Yes I am still NOT letting attributes be increased with XP, only skills.   This gets rid of the Conan the Librarian issues, and places finite limits, of a sort, on each character.  Blame it on my like of characters like Batman, Green Arrow, Captain America and the Falcon if you like.  I prefer the skilled ultimate human hero, over the super human hero.   This should allow unique heroes that need each other to succeed over the high fantasy indestructible type.

Comments or concerns are welcome. 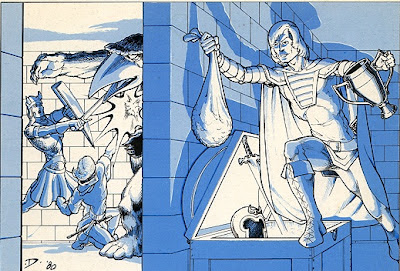 Treasure in HOW is handled a bit differently (I think) than other games I have played.  Creatures ( or people) will have a treasure class based on where they carry their stuff.  Pockets, Pouches, Packs, etc. Some may have Lair or none such as a dinosaur.

Each location type will be a d66 roll and additional sub tables for Magical or Odd items will exist as well.  So a kobold might have Pockets listed as its treasure type, and most of the rolls will provide mundane items or a few coins. Yet there is a chance something unique, cursed, or magical might be found.  The chance of finding better treasure and the type of items found change with the notation of pocket, pouch, pack etc.

To me this is a more logical presentation/classification of treasure and finding mundane things may add to player creativity in game as well as making finding magical items more special and unique.

In addition my wife is starting the cover for HOW so I hope to share a sketch or two in the days to come. I am removing the HOW beta rules from download, there are a number of changes which the beta rules do not represent properly.
Posted by Fenway5 at 4:48 PM No comments:

Shadows in the Dark 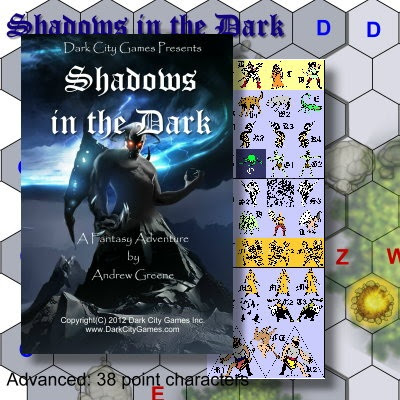 Other good news? When HOW (and BBM for that mater) release, you will have a mass of adventures already available to use!  HOW works great with Dark City Gams adventures and I have used them in play testing Heroes & Other Worlds.

If you have not played one of their modules yet, head over and check out their full line, I highly recommend their modules!
Posted by Fenway5 at 5:47 AM 6 comments:

I am still crunching away and am working on adding random treasure tables, random dungeon creation, and fleshing out more bits.  I have two quick questions though and appreciate your input:

1)Title Font
I think the original TFT title font, while classic, isn't easy to read.  I am torn between a variation of the font or breaking with it all together.  I compiled a couple different ideas and if one strikes you let me know.  2 columns (1 & 2) and then a letter (A-E).  So you could vote 1A or 2C.  Any thoughts let me know.

2) Equipment. Armor, Etc.
Rather than putting this in the middle of the book and try to hunt it down, I'd like to put it all in the back as an appendix.  To me this seems more simple and useful, to flip to the back to find it rather than hunting for a page in the front third of the book a ll the time. Any opinion?

Changes: No Hit Points.
Instead damage comes off the character's EN first as wounds, than ST as mortal damage.  Opponents still just use ST/IQ/DX...although a referee could have a special opponent (vampire, evil wizard) use EN as well.  I think this fits better with the original game concept, but insures characters are heroic and able to survive a bit longer. 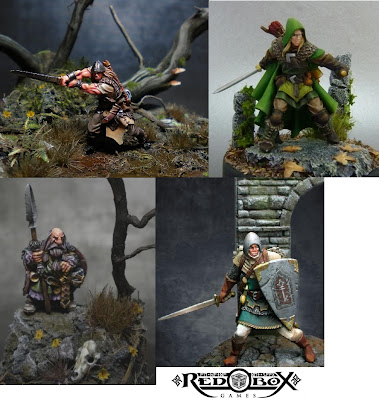 One of the hallmarks of TFT is the use of figures to play.  Martian Metals, way back when, actually produced a line of 15mm TFT minis.  Man I'd love to have or even see some of those!  Anyone know where I can find images? Let me know!

I like using minis when we adventure, and wanted to recommend Red Box Games figures.  Nope, no kick back or free figs for the mention, just an honest "holy crap these are cool" mention from one gamer to another.

The selection is outstanding, and the sculpts?  Unbelievably cool.  Hands down the best I have seen!  They fit they way I see fantasy stuff, a little grim and gritty.  Yes they are a bit pricey, but I'd rather spend a bit more to get something of high quality than half price for "it will do" material.  If you have not seen their work, take time to check out their site and order a figure or two, you will not be sorry!  I am going to add them to my link list on the site, along with Dark City Games, as a quality game material producer you can count on.
Posted by Fenway5 at 9:10 AM 2 comments: 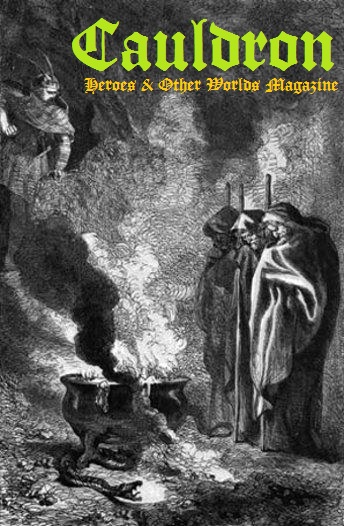 Part of the overall plan for Heroes & Other Worlds is to also have a 'zine to support it.   Just like Rogue Transmissions for Rogue Space, Cauldron will be a shared labor between myself and you the player.  New Spells, new creatures, random charts, and even adventures!

One of the things I loved about the golden age of gaming was discovering new ideas and options in each magazine issue. Whether it was The Space Gamer, Dragon, Different Worlds or any of the other gaming mags of yore, each provided a variety of short and interesting potential additions to your game.

Considering the wealth and variety of talent in the blogosphere, I look forward to seeing what sorts of magic bubbles up in each issue.
Posted by Fenway5 at 4:19 PM No comments: 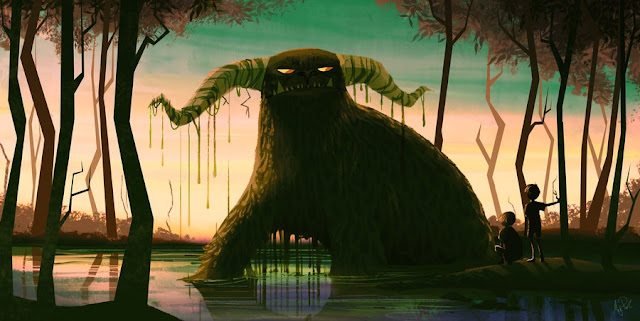 Currently I am working on the bestiary included in the HOW rules. There will be about 70 creatures included and I am trying to write a brief but descriptive entry for each.  Currently (with no art) the booklet is 36 pages.  When I add a treasure generator and flesh out basic adventure creation it should be 48 pages or so.  Add art and is probably 64 pages all told.  A smallish but perfect little complete RPG game.

Blades & Black Magic will provide additional spells, creatures, treasures and a simple setting.  HOW will be required to use BBM.

NO XP feedback? Well then no complaints if it gets used in game! Work on the core system book HOW is huming right along.  I have 70 creatures in there and plan to write a line or two about each.  Considering adding a special ability kind of thing to each--like Mountain goblins able to climb walls and ceilings like spiders....that sort of thing.

I am also pleased to show another preliminary sketch for Blades & Black Magic from Luigi! 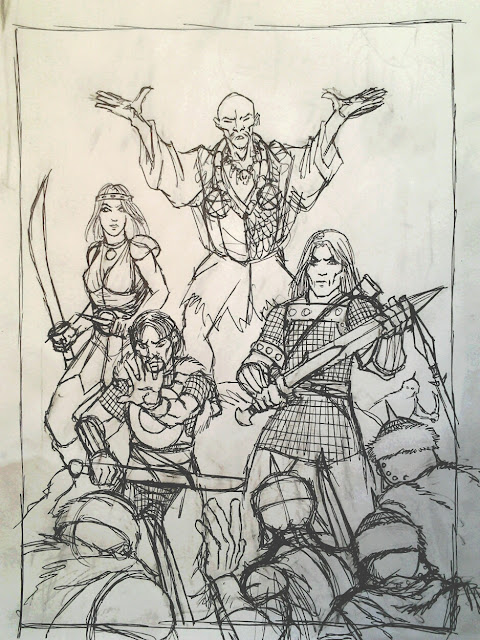