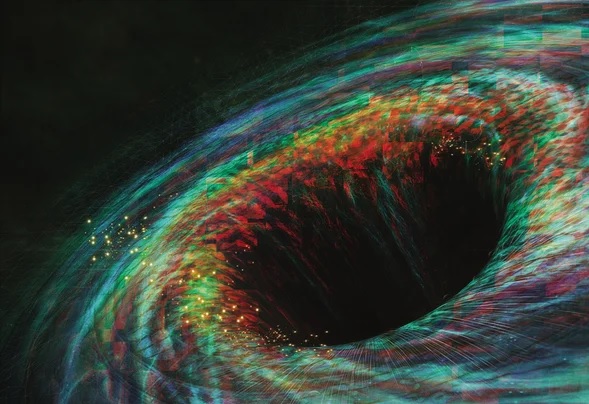 Void, the spaces between galaxy filaments that contain no galaxies. Void, a pore that remains unoccupied in a composite material. Void, synonym for vacuum, a space containing no matter.

In Black Magic, the void is the mutating, magical, unliving force that creates the power of spells in this setting. Maybe it is sentient in a way a human cannot understand. It is not necessarily malevolent; it simply does not care. All that is known about the void for sure is, it can grant powers and it is always hungry.

The void thrives and grows by consuming the light and life of everything it can touch. By feeding the void—whether by chance, unfathomable sentient decision making, or simply as an excretion from being fed it gives strange abilities to those who know how to feed it.

Pulling beings from distant planets, or strange dimensions, filling the space between worlds and hungrily gnawing on the edges of your own world, the void takes away life in equal portion to the strange powers it grants.

WHY THE VOID?
For me, (YMMV)  I want my games to have some reason for what happens. Most fantasy games just have magic because 'the world is magical"  Some have "life pays for life" and though life force or blood or health or fatigue spells happen. That's part way to my thinking that there needs to be some sort of player give (a painful payment) to be able to take (cast a spell).

That;s good enough, but for me I wanted an actual force that is consuming the payment.Now here is where "pacts" with strange or demonic beings come into play. Black Magic does allow some sort of servant pact like that to gain access to powers--but what about"the guy behind the guy?"

Here in Black Magic, I wanted (needed) something that corrupts but is incorruptible and cannot be reasoned with.  It is just sort of there, everywhere around you. Something you know but is unknowable. The night, the dark of your room, the deep black of caves under mountain.  That strange feeling that something is moving around your but you cannot see it--but you sense it is there--and it is not at all kind. It is as primal a force that has haunted humanity from the beginning of time, FEAR OF THE DARK.

So the void represents that. The absence of light, the absence of life, that moving living inky blackness that owns the world for 8+ hours a day. By feeding the void you can gain some strange weird abilities or powers. Feeding the void unlocks things humans were not meant to know or see, and you allow them entry into your world. The void eats away at the barriers that keep our worlds or dimensions separate.

Feeding the void makes it stronger, hungrier for more and in doing so, for the strange spells and abilities it grants-- you are robbing your world of light and life until with enough power the void simply becomes a massive black hole draining your whole galaxy of light and life.

...and that's the reasoning behind the void being the power behind magic in Black Magic.
Posted by Fenway5 at 10:36 AM 4 comments: