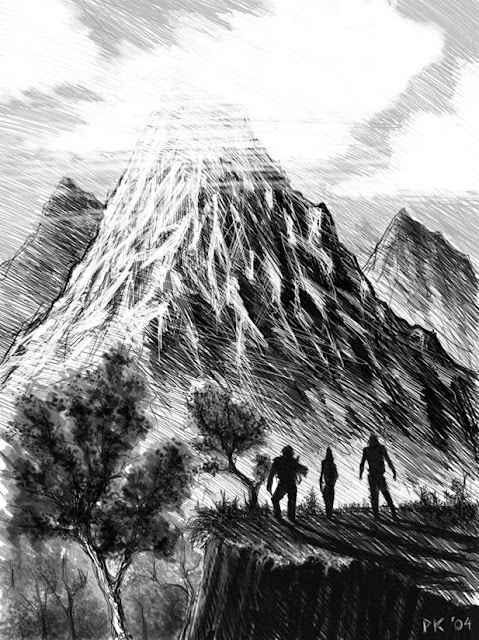 Okay in the past few weeks I created a mountain of new stuff for you:

All this for the incredibly low price of FREE! (just click the logo to your right to download this great stuff!)

So I have three ideas for what to do next.

1. A referee/ adventure guide for the RPG
2. A skirmish scenario book or mini campaign
3. Nothing, just move on

Let me know if you have a preference for one of the above, or a mystery 4th option you think of!
Posted by Fenway5 at 7:47 PM 7 comments: 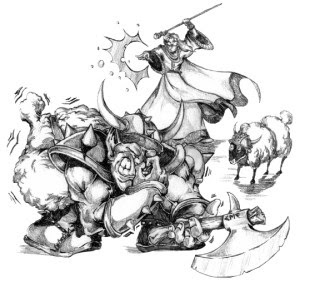 I was asked a question that I thought might be of broader interest to more players.  The questions was, do I have rules or a system to convert HOW RPG characters over to HOW skirmish.

Short answer? Not specifically.  As the HOW RPG can be played skirmish style already, it did not occur to me to create one.

That being said, I can see where someone just wants to play a quick battle and HOW RPG contains nifty bits to add to HOW skirmish.  So for those interested, here are the untested rules:


As to conversions from HOW RPG to HOW Skirmish? Well that would take a bit of work but off the top of my head I think you could:

1. Get rid of EN
2. Divide each of the RPG character's ST, IQ, and DX by 4 and the result is its HOW skirmish value
3. MV translates straight across

That will mean a 6 or higher rating on many creatures ST.  Take any ST above 6 and turn it into HTK for that creature. Yes that does mean the creature can "auto hit" in melee, but that is what makes a monster monstrous!

Spells would NOT cost EN any longer--but the EN value of the spell now becomes the Point cost necessary to use it. Not all spells translate very well, and if a HOW RPG spell sounds similar to something in HOW Skirmish, switch the RPG wizard's spell to the Skirmish variant.

Not perfect, but just dangerous enough to have fun with!
Posted by Fenway5 at 6:56 AM 2 comments: 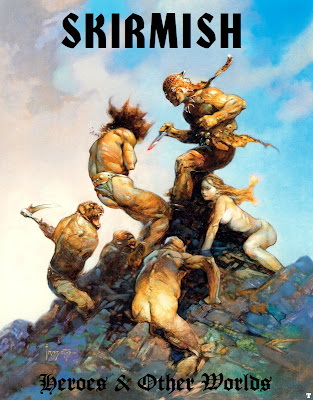 I did a quick clean up of the rules and gave it a proper cover.  No major changes at all, but you can download it's pocket mod goodness for free now!
Posted by Fenway5 at 9:10 AM 2 comments: 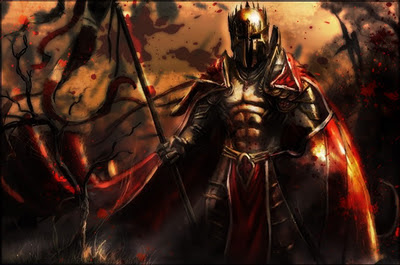 My wife and I played a battle today using the Heroes & Other Worlds Skirmish rules and I thought it would be good to post a quick report.  Note while my wife likes games, this is not the sort of game she is used to playing.  So while she can tell an Orc from a Goblin, she isn't a hard core gamer.

The battlefield 24x24 with 16 chessmen scattered around in diamond pattern.  Center of the board was The fabled ORB OF MIGHT!

Goal: Grab the Orb of might and take it off the board back to your wizard's keep. We each started on opposite sides of the board.

I arrayed my forces goblin archer in a line first, followed by a row of 3 orcs and the Necromancer Eddie in
the back.

She placed archers on the wings, with knight and spear man in the middle and the sorceress behind the row of  warriors.

Turn 4: First blood. A goblin archer shot her spear man...but was shot in return fire.  Her: 4 left Him: 6 left

Turn 6: Orc moves in to retrieve Orb. Necromancer casts shatter on archer's bow...but he gets a shot off and kills the necromancer. Another orc is dropped by the second archer.  Her 3 left (dagger wielding archer, knight and archer) Him: 2 orcs.

Turn 7: Orc carrying orb moves to leave the battle field, second orc moves into hand to hand with knight, they trade blows but both survive. Archer shoots at orb carrying orc and hits...his shield. Her 3 left, Him 2

Turn 9: Orb Orc moves closer to edge of board...and is shot by William Tell in the back...The Red Knight has his men retrieve the orb and its off to the bar to quaff some brews.  Her 3 left, Him:0

The whole battle, with explanations, questions and spell reference, took 50 minutes and I spent 30 in prepping figure sheets and the battlefield.  A roaring success as we will face off again after dinner.

Some tweaks and clarifications are still necessary, but I think I can clean it up and have it in a 12 page booklet soon!  As is, the pocket mod works well and is free to download!
Posted by Fenway5 at 5:39 PM No comments: 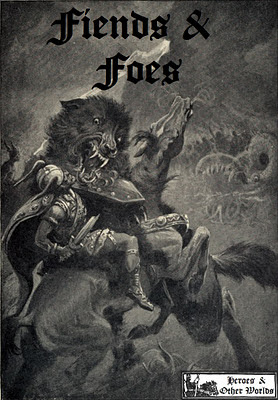 Here is the first monster book for Heroes & Other Worlds RPG.

Note the original file was a download with no author given and no credit claimed in the text.  The images were part of the original document and only minor changes were made by me to have it synch up with Heroes & Other Worlds.  Note there may still be some stray bits that are not perfectly HOW compliant, but certainly it is more than enough for someone to use with the Heroes & Other Worlds RPG rules.

I make no claims to authorship, creativity, artistry, or any sort of copyright on this download.  It is provided freely, and is now available in the download section, just click the HOW logo to the right.

Also you can still download the new HOW Skirmish rules for miniatures and I posted a new Skirmish tracking sheet for your figures when you play!
Posted by Fenway5 at 8:28 AM 4 comments: 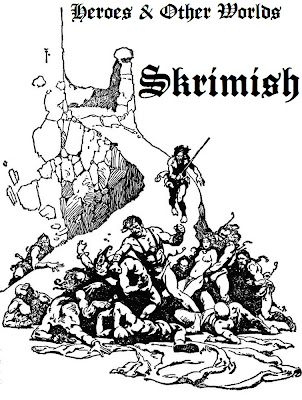 The 1st draft of HOW Skirmish rules are now up for download in pocket mod format.

Lots of room for additions and probably clarification.  Note as per HOW rules, skeletons are immune from ranged weapon fire.

Your thoughts and comments are welcome.  Download it now by clicking the Heroes & Other Worlds Logo to your right.
Posted by Fenway5 at 11:50 AM No comments: 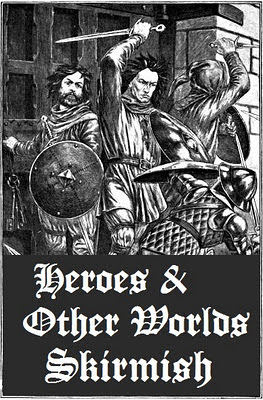 Inspiration has struck again with an unexpected turn. Inspired by the original TFT...and Cry Havoc...and the old Heritage USA miniature rules for their Dungeon Dwellers games, I plan on releasing a miniatures based skirmish game for Heroes & Other Worlds.  When? How about in the next day or two.  Pick some figs, some six sided dice, and go to war.

You will be able to build your own forces, pick spells and make little war bands to do battle, have them gain experience...and it will all be contained within the pages of a wee pocket mod booklet. 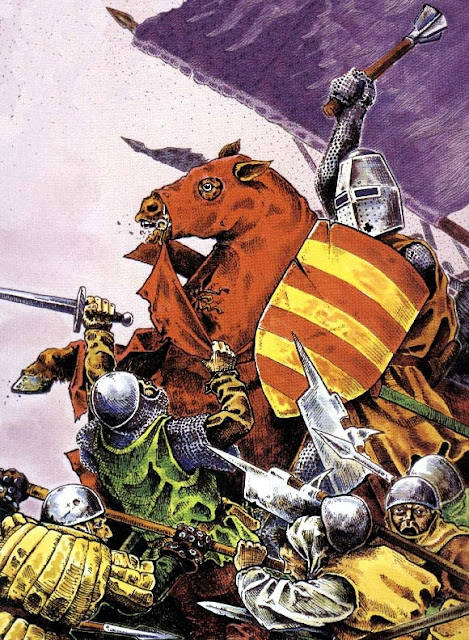 I just finished a post at my Sword & Shield blog about the Cry Havoc game series.  In a nutshell while the game was not that good (for me) the maps and counters were PERFECT for use with Melee/ Wizard and now Heroes & Other Worlds.

I posted a couple of the maps in the downloads sections and will be cleaning up the counters next week for use with the maps.

Enjoy the downloads!
Posted by Fenway5 at 5:22 AM 2 comments: 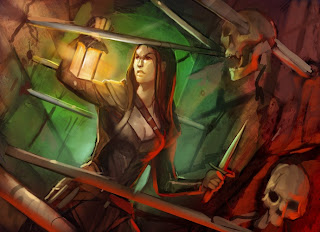 The witch focused pocket mod will be easy to throw together, but the referee's book (still need a good name) will take a bit more time.  Once it is done, it will contain an expanded list of foes and I will probably take out the monster list from the current rules book as it will become the players book.

The "style" of writing from the players' book will carry over to the referee's.  It will not be an exhaustive tome trying to cover or create answers for everything. Instead it will provide the basics and outlines for doing things or how to do them with a simple "nudge you out of the nest little bird" spirit.  Experienced gamers will no doubt have their own ways of doing things anyway which will be perfect as they know how and what to do already.  For a new player, this will be (I hope) a good starter experience.

While the referee book will be larger, it will be due to additional spells and creatures as well as magic items.  So more reference material for you to use, but again not and an exhaustive tome.  I hope to keep it to 36-38 pages.

Anyway thanks for giving the game a go, and your comments, good or ill, are welcome.
Posted by Fenway5 at 2:56 PM No comments: 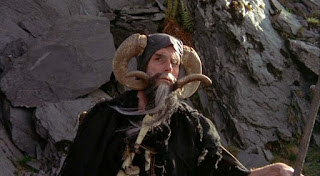 First, thanks for following on after the change over.  I have an idea for what to do next for Heroes & Other Worlds and I'd like to get your opinion.  I am thinking about coming up with a series of Pocket Mod books where I convert Open Gaming Content spells into Heroes & Other Worlds game format.  But each spell book would be focused on a specific kind of Wizard "subclass."  For example a  witch "specialty wizard" book.

....and the work continues

To show I had no ill intent and did not want any ill will, I simply changed all my naming to Heroes & Other Worlds.  Same game play, different name.