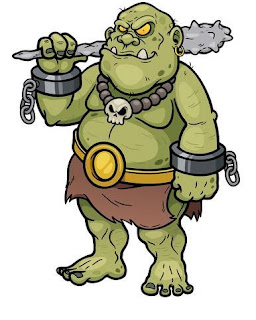 A rough collection of notes, lists and scribbles of ideas is slowly taking some sort of shape.   O.G.R.E. stands for Occultists, Grunts, Rogues and Ecclesiastics. It uses only d20 dice but is not a standard d20 system.

Character creation is fast and simple.  In essence you roll (or choose) your background, roll some characteristics
and then pick a class. This will be a heavy and broad class based system. Lots of different specialized classes that provide certain abilities and spells are predetermined/fixed by class. No attributes to roll up-- characters of class are considered to be pretty much the same.

Combat is quick and damage is fixed based on class or modified slightly by specialized ability.

I would also intend O.G.R.E. to be more of an open source game you could make/publish your own adventures and additions--though I am considering imposing a page limit. Maybe 12 or 24, the key is keeping things for the system quick to digest, simple to get into and very focused on a specific topic.

I want the rules to be short and playable. Then optional topic add-ons like Dungeons, Barrow mounds, Mountains, Demi-Humans, Cities and more. Bolt on or delve into topics you want, ignore the stuff you don't care about.

One more idea and draft in progress...

Hello, its been awhile

No doubt, like yourself, a lot has happened in the last year--and not all of it good. Wherever you would in an ideal situation like or want to go, life has a way of guiding you to different places. So here I am a year later, still struggling through things, like you are, without a lot of time for creative focused writing or even time to game.

Okay all the being said, where do things stand.  Well not too much further from where they were.  I have scribbled notes for:

--a word based magic system: Each word used to cast a spell takes 1 ST. Fire (1d6) is 1 ST to create-Throw is another 1 ST--- then you modify it further based on longer range or more damage or length of effect (per turn).

You can know a number of power based on your IQ--so this gives the player the ability to craft spells or get creative with them.  Good for an experienced player to shape spells in concert with the experienced Referee--but hell for a new player/ new referee to sort out and causes game delay. When you have to stop and--discuss---the spell cost or player spell concept vs what Referee thinks it should be?  Kind of derails and leads to potential rules lawyer paralysis. No quicker way for me to walk away from a gem then pedantic arguments over gaming a system.

Magic and Miracles--philosophy: I wrestle with the idea of clerics v wizard but feel there needs to be basic philosophic difference between the two to create a "WHY?" they are different beyond--this one learned a spell--and this one follows a god.  For me it comes down to magic is selfish (protect yourself, material gain, your won power)vs. miracles are selfless (protect others, provide guidance, heal/feed/rest).  Now how to rule that conundrum mechanically and does it make sense in a world with pantheist beliefs based on human foibles? It may not exactly. I have some thoughts on how to make it work mechanically and it could be as simple as the god provides a limited set of power words that serve them/their aspects. The level of a clerics devotion influences the ST cost of casting.

Beyond this--I am intrigued with MOTHERSHIP RPG and have an adventure outline kicking around as well as some scribbles for a d20 system called OGR.

I hope all is well with you and yours--I am still alive and kicking, I continue wander through challenges one step at a time, ever forward and appreciate your patience as I make my way.