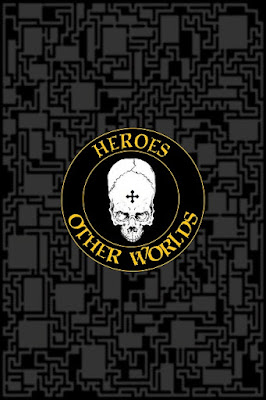 I have had requests for a Hard Cover version of the Heroes & Other Worlds Core book, so I have made one available. Above is the cover piece, the back cover is the same as the current paperback. There is no content difference between the paper back or the hard back version. Currently Lulu has a coupon which may or may not work for you depending upon where you are in the world.

Enter code MAYMON27 at checkout and save 27% on all print books. This offer ends Monday, May 30th at midnight. Remember, coupon codes are CASE-SENSITIVE.
Posted by Fenway5 at 7:46 AM 9 comments:

In praise of Raedwald 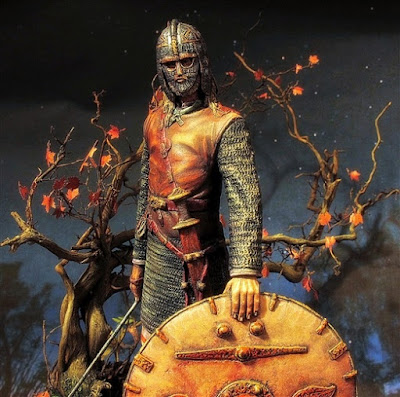 Lee Reynoldson's Raedwald is a vastly under appreciated work. Yes I am very biased in my assessment--but I hope this recent post by Jeff V. may shed some light on it for you and possibly help the work gain more interest and better yet--more people playing!   There really isn't another current campaign setting like it that I am aware of and it is a shame more folks are not diving deep into this Other World...read on and see an unvarnished review of sort of Raedwald; Thanks Jeff V. for the support and for sharing your thoughts. Lee's work truly deserves to be more widely read, played and appreciated:

First, a little personal background. I'm not a fan of "gritty" fantasy. I play Fantasy RPGs to ESCAPE from "grit," not wallow in it, and while we all know the dark ages were nasty, brutish, and short, that's never been something I wanted to spend hours playing at on the gaming table.

So, as a result, I studiously ignored Lee Reynoldson's offering of "Raedwald" for HOW. I figured there were things I was more interested in (you know, things in the "high fantasy" genre) that were much more worth my time and money. Low fantasy in the worst part of the Saxon dark ages? Simply not my cup of tea!

Well, I can be the bigger man here, and simply admit flat out I was wrong. A couple of weeks ago, I had a few extra dollars burning a hole in my pocket, and Lulu was offering free shipping (and I do prefer print copies of my RPG stuff when I can get them), so I decided, "Oh, what the heck!" and ordered it.

I must say, I was simply blown away. This may be the best single fantasy campaign supplement I've read in the past four or five years. It absolutely destroys even things like Morgansfort and Chaotic Caves that have been done for HOW! Frankly, even if I never play in the Raedwald world (and, blasphemous as it sounds to people like me who prefer our fantasy "high" and our grit "low," I can DEFINITELY see myself playing in a Raedwald campaign), the presentation of the society and its relationships, the political intrigue, and the whole concept of a "wolfshead" campaign is so well done that I can easily see it informing (and very much IMPROVING) my concept for the more barbarian societies in my normal campaign setting. To sum up, Raedwald is a triumph among campaign source books and I think it may be the best gaming dollars I've spent so far this year (since I already own everything else HOW there is...).

To C.R. Brandon and Lee Reynoldson, all I can say is both "Bravo!" and "More!" And for any of the rest of you who either felt like I did about "low/gritty fantasy," or who simply haven't had the occasion or opportunity to check out Raedwald, don't walk, but run to your computer (or FLGS if you're fortunate enough to have one of those) and get a copy as soon as you can. It truly is amazing!

Interested in picking up Raedwald? LuLu has a code MAYSHIP15 to save 15% on all print books PLUS get free mail shipping.

On a separate HOW note--travel every other week has kept my ability to write  next to nothing.--I jot down note as I can to develop but serious writing time eludes me currently.  I may simply have to publish the SWORDS OF DOOM BOOK and then hit the SPELLS OF DOOM (SORCERY OF DOOM?) Magic book at a later time rather than both at once.  That is TBD. In the meantime here is another little doom tune from Windhand...