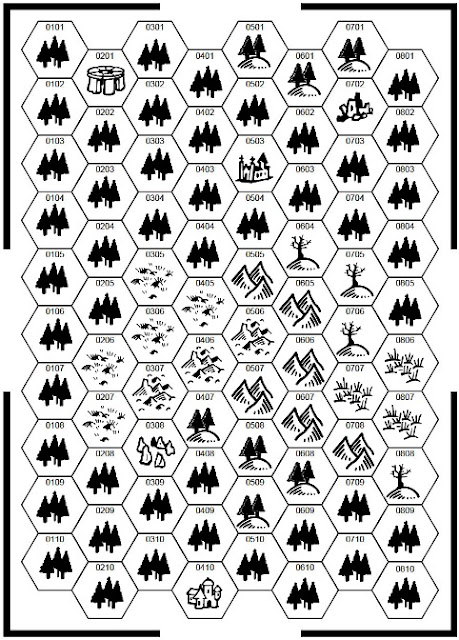 Here is a sneak peek of the Briarmoors which is the mini-hexcrawl going into the Halloween book.  Still have not decided if it will be a one shot book or official Cauldron #2, but I still have time to figure that out!

In addition here is one of the new critters showing up in the Briarmoors...

Bog Rotters are pale froglike humanoids known to inhabit swamps, moors, and other unpleasant areas. They tend to live in tribe like groups and fiercely protect their breeding grounds.  Their eyes give off a pale red luminescence which is often mistaken as lamp or torch lights in the gloom or fog.  The Bog Rotters often use this to lure unsuspecting groups into marshes to get them stuck, into fog to get them lost or worse into ambushes so their young can feed on the victims warm living flesh.

SP: Rot
The touch coveys a rotting corruption to cloth, leather or even scratched skin. Cloth will rot to useless rags in 1d3 days, Leather in 1d6 days and skin touched becomes diseased. The touched suffers -1 ST per day for 1d6 days or until the wound is cleaned thoroughly with soap and hot water or is doused liberally with a high alcohol content liquid.

As I work on a spooky themed Cauldron #2 It's really fleshing out into its own book of sorts.

I am considering making this whole thing a one time a year only, Halloween, purchase.

And part of me is even considering making it a one time only purchase on Halloween 2013--physical copies only.

Not sure yet where it will net out, but as I work away on it that's where I am.

By the way if you know Latin can you tell me which might be correct?

I woke up at 2am thinking about this so I dashed off the revision below.  Nothing major really, just a good (IMHO) refinement. 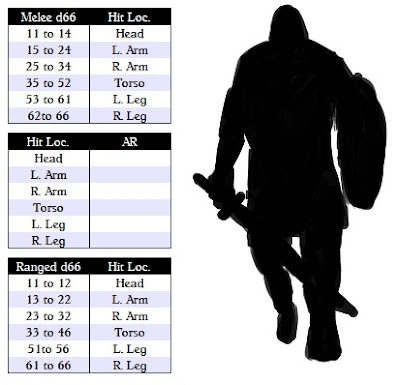 In addition to further simplify hit location, I combined abdomen and chest into one simple Torso location. Where I am "stuck" now is in hit location results.  I envision two different charts.

Then a secondary list of critical results by location that each have a random roll.

The "stuck" part is how to determine when to switch between the two.  In my mind this can be either or maybe both:
1) the result of rolling a critical result (a natural 3 or 4) roll for a critical
2) or can be based on weapon damage delivered: (if 6 or more points of damage are taken,after AR deduction, by a human sized or smaller sized opponent in one attack, roll for a critical.

Just a quick update on what's happening behind the scenes:

Working on some materials for Cauldron #2

Working on the HOW versions of Redwald.

Working on translating 2 great OGL adventures to HOW.

The work continues
Posted by Fenway5 at 6:12 PM No comments:

So I had an interesting set of questions come up.

Just in case you had similar thoughts or questions I have posted it here:

Q: If a character has Dagger+2 (allows one extra attack per turn), and Two Weapon Combat +1, does this result in three attacks per turn or four?

What if the character Berserk Attacks?

What was your intent here?

A: Good questions. This situation never came up in any play testing situation, I never had any players try stacking skills or ask about doing it.

I'd rule it as pick which one skill you want to use in combat, either dagger or two weapon attack.

As to Berserk? This seems to be causing much more confusion than I ever thought possible. It's my fault for assuming the word and notion of Berserk was clear on its own.

So the definition of the word Berserk is

1. Destructively or frenetically violent: a berserk worker who started smashing all the windows.
2. Mentally or emotionally upset; deranged: berserk with grief.
3. Informal Unrestrained, as with enthusiasm or appetite; wild: berserk over chocolates.

In no way does the notion of Berserk imply a cautious or carefully skilled maneuvering.  Going berserk is the antithesis of a skilled attack as it is raw fury. In my own games only starting characters or low ranking foes used berserk as once they got some skill it was not necessary as a manuever. Most players saw going Berserk as making you too vulnerable, especially if archers or slingers were around.

So all of that to say, a player trying to combine their skilled attacks with a Berserk action is misunderstanding what berserk means as a word and why those two things do not go together.

Clearly that's may fault for assuming the term and idea of berserk would be clear.

Thanks for the questions.
Posted by Fenway5 at 9:44 PM 6 comments:

Now I am cold but a ghost lives in my veins,
Silent the terror that reigned -
Marbled in stone
A Shell of a man-god preserved -
For thousand ages,
But open the gates of my hell-
I'll strike from the grave!
--Iron Maiden, Powerslave

For the past two years I tired to put together a 31 days of Halloween 1 page adventure compilation for October. It never worked out and after two strikes at the plate, I am not going to get rung up swinging for the fences with a third try.

Even so I think Halloween  is the freaking PERFECT theme for  Cauldron #2. Why not have specialty Wizards like the Necromancer or Witch? A Specialty Adventurers like the Witch Hunter? How about creatures like the Vampire or Werewolf? I left lots of thing out of the HOW basic rules on purpose so they could be explored in depth in articles for the Cauldron.

With the theme set, IF there is something YOU would like to develop for Cauldron #2 like a creature, spooky adventure, or specialty variant class for HOW...here is your chance!  Deadline to submit would be Mid-September. 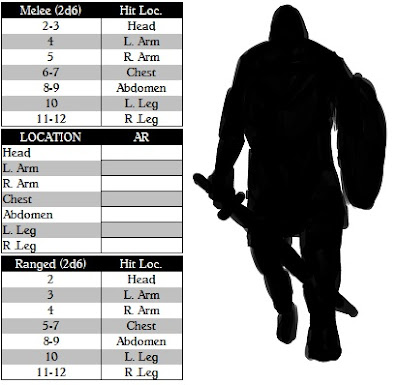 One of the good memories I have from RuneQuest (Started with the AH players box edition) was the idea of hit locations and armor by location.

It was a very simple system that added a little crunch and cool factor without going crazy (like the I.C.E. Law products or say FGU's Aftermath.)

So inspired by that to the left is a simple version for HOW. It will be fleshed out with optional impact results based on damage/location-but for now if you'd like to use something like this to spice up your game, have it!
Posted by Fenway5 at 9:24 PM 9 comments:

One of the opportunities for improvement in HOW are the rules for combat option Berserk. Having play tested it I did not run into the issues being raised now.  So let's look at it.

First what the frak is a Berserk anyway?

From Wikipedia
The actual fit of madness the berserker experienced was referred to as berserkergang ("going berserk"). This condition has been described as follows:

This fury, which was called berserkergang, occurred not only in the heat of battle, but also during laborious work. Men who were thus seized performed things which otherwise seemed impossible for human power. This condition is said to have begun with shivering, chattering of the teeth, and chill in the body, and then the face swelled and changed its colour. With this was connected a great hot-headedness, which at last gave over into a great rage, under which they howled as wild animals, bit the edge of their shields, and cut down everything they met without discriminating between friend or foe. When this condition ceased, a great dulling of the mind and feebleness followed, which could last for one or several days.[14]

So in combat you become a wild killer. Now my concept was to make this "berserk action" into a simple and clean basic option in combat.  The issues that have arisen make it clear that its neither clear nor simple. So let's see if we can't tweak it a bit:

BERSERK you get two attacks on your turn, either two on one foe or one attack each on two adjacent foes, but you lose all defense options and any armor protection (AR) while you are berserk.

Wait...the rules don't say (currently) I can't choose to defend, and you are correct. I assumed the idea of going Berserk spoke for itself...Berserkers did not attack and then parry or block or dodge..they just all out attacked! So its my fault for assuming the idea of going berserk spoke for itself.  So to be clear...IF an attacker goes Berserk, he cannot choose ANY defending maneuvers/actions nor receive any AR protection while Berserk.

Next is the idea of Berserk rage. I was saving this as part of the advanced option in BBM, but what the hell, we are discussing Berserk here.  The following are advanced options for using the Berserk combat option in your game.  You can use them or not, but the Referee needs to be clear BEFORE the game begins if these advanced rules are in effect or not.

Going Berserk (Advanced option)
To use the Berserk combat option the attacker must spend 1 turn not moving and doing nothing but focusing on going berserk. If attacked or wounded during this turn of focus, the berserker adds +1 to any damage done while berserk.

After the turn of focus, the attacker goes berserk for 1d6+1 turns randomly. Each turn spent berserk the character can move up to 1/2 their normal move and may make 2 attacks on one target or one attack each on two adjacent targets.  A Berserker loses all defense maneuver/action options and loses any armor protection (AR) while berserk. If there are no foes left alive in combat, the berserker will next attack its own friends, starting with the closest ones, until they are dead or until the berserk rage is ended.

The berserk attacker spends 1 EN for each turn beserking. If no EN is available, 1 ST is spent for each turn berserk. After ending the berserk rage, the berserker collapses and is stunned for 1d6 turns. The collapsed berserker may make take no actions, no maneuvers, no speaking, nor any movements while stunned. After this collapse period the former beserker may move and act normally.

Remember HOW is the love child mash-up of of Moldvay Basic D&D, Melee, Wizard, and Dragons of Underearth.  I saved a lot of the more advanced, optional or crunchy rules for a later volume Blades & Black Magic. So stay tuned fellow gamer, there is more to come.
Posted by Fenway5 at 7:58 PM 3 comments: