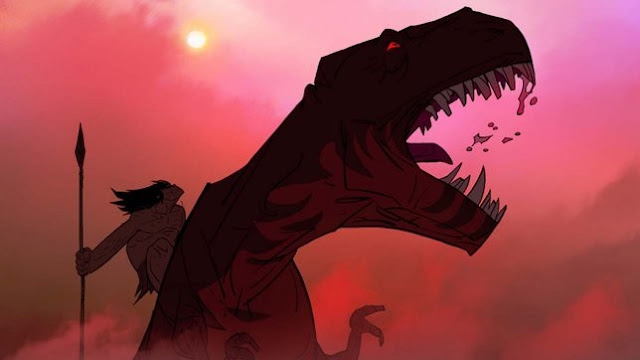 Genndy Tartakovsky is a freaking genius.

Samurai Jack is such an incredible work of philosophy, action, art and story telling that nothing else animated (save the recently redone Star Blazers series 2199 and 2202) has grabbed me and made me want to binge every episode.

For anyone playing BLADES it is filled with inspirational content and I want to write up a whole supplement for BLADES set in this sort of PRIMAL setting.

There are so many scenes that recall CONAN to me within PRIMAL that my poor mind was just gobsmacked by inspiration and entranced by the animation.  I binged all 5 episodes last night and am still mentally swimming in the PRIMAL landscapes Mr. Tartakovsky and team have created.

Oh and one other note--THERE IS NO DIALOGUE. 100 animated minutes within 5 episodes and outside of grunts, growls, roars and yowls--NO DIALOGUE and it is an EPIC STORY because of it.

The music and sound are so critical to pulling off a story like this. The mood, the rise and fall of action and the intensity created are so well done through the visuals and sound and music that it all bleeds into your spirit simultaneously.

Most movies and studios never achieve this same level of spirit or involvement--so doing it through an animated story with no dialogue but music and sound is an unbelievable achievement.

Did I say Tartakovsky is a genius? Sorry I meant supra-genius.