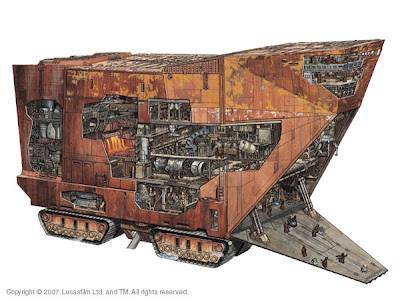 The Savage Swords adventure idea for HOW is really turning into more of a "Sand Crawler."  Not sure that's a wholly originally term for the type of adventure as I conceive it. Hell it may not even be the most accurate term, but it strikes me as accurate and appropriate.

Okay so how does it work?  Originally my idea with Savage Swords was to mimic the Man to Man adventure Orcslayer.  Orcslayer is a series of  combat scenarios linked with role playing Interludes between each battle.  Love the idea, but it is definitely a railroad experience and I wanted to "improve" on it. So I was thinking about how I could tweak it and make it a bit more interesting to play and referee.  That's when the "Sand Crawler" came into being.  Here is how it works:

There are lettered combat encounters, but the path and order they are explored is up to the players.  There are "exits" listed at the end of each combat scene.  Then as the players progres to the next scene there is an "encounter table" for each hex they move through.  Depending on time of day the chance and type of encounter changes.  Eventually the players make it to the final "win" combat scenario and the adventure is over.  Below is a quickie map to illustrate the idea. 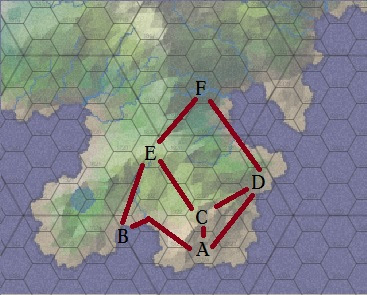 So there is the Heroes & Other Worlds "Sand Crawler" adventure idea that is going to be the guts of the Savage Sword adventures for HOW.

Side note, my wife is almost done editing Magi Carta and I have used her edits to get IQ8-IQ11 tightened up.  I am going to push this weekend to finish the edit and appreciate your patience as it all comes together!
Posted by Fenway5 at 5:45 PM