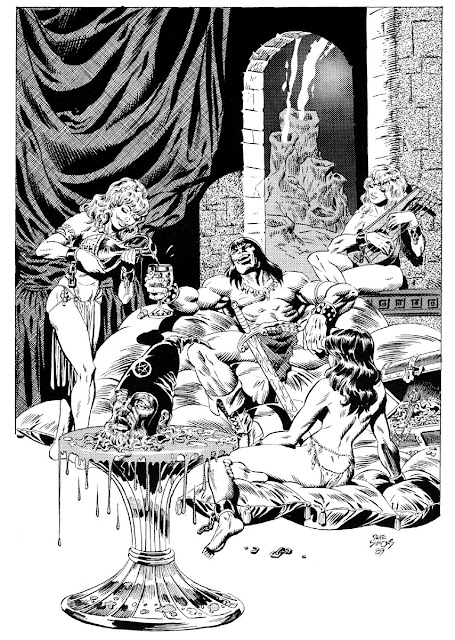 It is done, commence quaffing of beer to toast the release of Heroes & Other Worlds.

Thanks very much to those who have supported this effort over the year with their feedback, enthusiasm, and comments.  I am especially indebted to my lovely wife, to Mr. Beau Chambers for his eagle eyed editing and efforts to make the game great.  (Beau don't order one because I have a very unique thank you kit I am putting together for you!)

I'd also very much like to thank the fine folks at Dark City Games. They allowed one of their programmed adventures to be used in HOW and as the games are compatible, I hope you check out an adventure or two from them!  They are great!

If you are interested in purchasing your own copy of Heroes & Other Worlds, follow the link below to purchase:

You can use the coupon code NOVBOOKS12 to get a 20% discount through the end of the month!

Heroes & Other Worlds is inspired by Melee/Wizard/ TFT system as well as by the Moldvay edition D&D Basic Rules book. So what does that mean exactly in terms of the game?

1) Only d6 are used
2) There are two broad scope character classes: Adventurers & Wizards
3) Each Hero has 4 attributes and tests are made by rolling 3d6 versus your attribute. Roll equal to or lower and you succeed, roll over and you fail. No AC or charts.
4) You build your character, both attributes and selection of skills/spells.
5) Combat can be played tactically using a map (squares or hexes), but it is not necessary.
6) Armor hinders the Dexterity of the wearer and subtracts from damage done to the wearer.
7) The basic tropes of dungeon creation, exploration, creature catalog, magic spells and treasure tables are all included.
8) TWO adventures are included, a programmed adventure courtesy of Dark City Games and a simple starter Refereed adventure.

If I had to compare it to something, I would not say TFT. Instead an idealized Dragons of Underearth by way of Moldvay D&D.

What HOW endeavors to be is a sensible and simple game system.  Where TFT and later GURPS took a detailed/simulation system path, HOW seeks to retain the original simple resolution but adding a Moldvian sense to game play.

So the HOW Rules book comes out and then what?

DARK CITY GAMES
Well first, I am happy to say HOW has the support of Dark City Games. The systems are compatible and they are allowing inclusion of one of their short programmed adventure in the rules book.  More importantly for the HOW player, this also means a tremendous amount of programmed adventures are immediately available to support playing the game at launch.

BLADES & BLACK MAGIC
This will act as a sort of  Expert Rules book for HOW. It will include a few additional character options such as faults and favors.  It will include more spells, more treasures, more creatures and wilderness/ hexplore rules and charts. A simple sample Hexplore will also be included.

THE CAULDRON
This will be a (ideally) quarterly 'zine to support HOW.  I will take player submissions as well as creating original content.  Dark City Games has already discussed including additional sample programmed adventures, and any optional rules for HOW going forward will be done via The Cauldron.

GRIM VENTURE
This will be a programmed adventure I write inspired by Death Test adventures.

If you purchase the game and take time to review it just let me know!  I very much hope you will enjoy the game and I look forward to seeing where and how far this little journey takes us.
Posted by Fenway5 at 4:27 PM