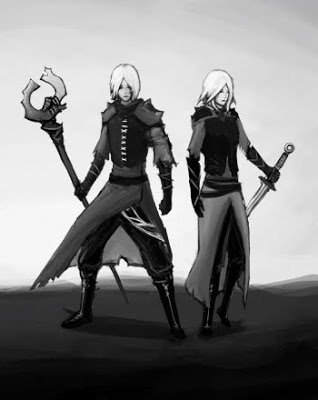 ...and the question I was awaiting has finally arisen.  Let's discuss the notion of classes and HOW.  As Heroes are constructed by players the way they like, every possible traditional class: Bard, Assassin, Thief, Barbarian, etc. is possible, but you can make it the way you want it!  Want a barbarian spell caster? cool.  Sword wielding wizard? Make it happen! No wonky multi-classing restrictions, nor strange obtuse XP chart rules.  Just simple, sensible, gaming.

Let's define Heroes. Every character is classified broadly as a Hero. The next subclass is to divide Hero into two broad specializations Spells (Wizards)  vs Skills (Adventurers). What type of Wizard or Adventurer you choose to be is up to you to create! Any Hero can use skills or cast spells. Wizards learn spells more easily than skills, and Adventurers learn skills easier than spells. That's really the prime difference.

Some Referees like to have lots of classes in the party and a flexible ( broadly defined 2 class) system like this may cause some concern. What I have found is players still gravitate towards and create characters reflective of traditional classes so every role is filled.  Even better, they have more flexibility to make it a thief or fighter they personally like rather than being pigeon holed or boxed in by class restrictions.

I had thought that adding in "sample classes" might be good, but decided to leave that sort of guideline for inclusion in either an issue of The Cauldron or Blades & Black Magic rules book.

What about feats and other specializations like that? Faults & Favors will provide a system for character advantages and disadvantages.  They will be included in Blades & Black Magic.

This in no way suggests HOW is somehow incomplete.  Instead, much like any good basic rules book, all the tools you need are there already!  Everything else is going to be neat additions/options to expand game play or options.

One project I have not mentioned before, but may get bumped up, is a book of spells with specialized sample wizards like healer, necromancer, elementalist etc. and attendant suggested spell lists.

Thanks very much again for your support and for giving HOW a try.  It's the game I always wished I had found and I am hoping you will like it as much as I do. Last chance to get it at a discount on Lulu.com.

Image by Andrew Chen, from his site.