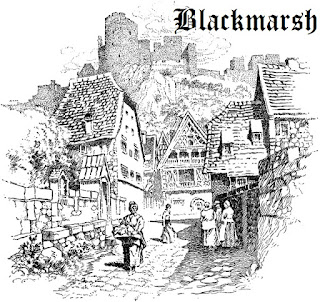 Second. I am going to include a new village, Bruen, which is a good starting point for adventuring in Blackmarsh.  It is a small village, but big things often have small beginnings! I use it in my own sandbox setting, Caswyn, when play testing HOW and I think it and the starting adventure (The Witch of Bruen) will be good assets to start your adventures in Blackmarsh!

I wrestled with including either adventure, let alone both, in Blackmarsh.  Yet when I put myself in the shoes of someone new to gaming, just getting back into it, or just trying to launch a campaign in Blackmarsh setting, it seemed like having a bit of extra information and a starting adventure or two fleshed out would be a good base one could build from.

I hate giving myself the extra work, but I'd hate more not doing my best to give you something  worth your money.  It's a blessing to have such a phenomenal canvas to work from with Robert Conley's Blackmarsh setting and it would be crime to do less than my best in adapting the Heroes & Other Worlds version of it.