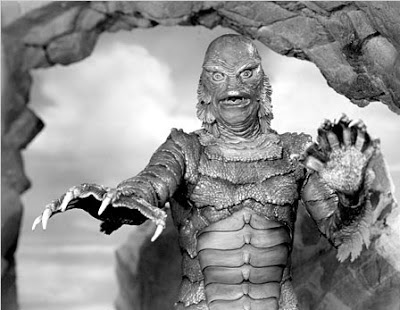 The Gillmen are an ancient aquatic race of humanoid standing between 5 and 6 feet tall.  Primarily found in tropical coastal or deep river, jungle environments. No one has seen a female Gillmen and there is speculation there may not be any as the Gillmen are know to raid human settlements and steal females.  Gillmen are extremely protective of their territory and are known to fixate on a female until they are killed or the female is taken out of their territory. The gillmen prefer to lure pursuers back into the water where they are more agile and apt to have a superior advantage to humans.

Adventure hook: The characters are asked to help in the strange disappearance of women harvesting muscles near the old sea caves.  Their baskets are found left behind with scattered shells and strange large wet foot prints.
Posted by Fenway5 at 5:24 AM